I’ve been reading all about the jade eggs you are selling on GOOP for $55-66 a pop and the corresponding interview with a jade egg enthusiast. I have tried not to respond to this hot mess, after all a man who leers at naked 15 year-olds and brags about sexual assault is about to assume the highest office in the land. Quite frankly women have more compelling health interests right now, however, I have been asked by so many people about your vaginal rocks that I felt it necessary to drop you a line.

I read the post on GOOP and all I can tell you is it is the biggest load of garbage I have read on your site since vaginal steaming. It’s even worse than claiming bras cause cancer. But hey, you aren’t one to let facts get in the way of profiting from snake oil.

My issue begins with the very start of your post on jade eggs specifically that “queens and concubines used them to stay in shape for emperors.” Nothing says female empowerment more than the only reason to do this is for your man! And then the claim that they can balance hormones is, quite simply, biologically impossible. Pelvic floor exercises can help with incontinence and even give stronger orgasms for some women, but they cannot change hormones. As for female energy? I’m a gynecologist and I don’t know what that is!? How does one test for it? Organically sourced, fair trade urine pH sticks coming soon to GOOP for $77 I presume?

If the word for womb is yoni I hate to break it to you, but the uterus and vagina are different structures. If you are using the Sanskrit, while I admit I am no language scholar, it seems that yoni means the entire female reproductive tract and you should say that. Terminology aside, the vulva, vagina, cervix, and uterus are not intuition repositories and neither are they sources of “power” or “wisdom.” If fact, I find that assertion insulting. Do you really mean a woman who does not have a uterus is less effective? Is a woman without a vagina less intelligent?  Is a woman who had a vulvectomy due to cancer less creative?

As for the recommendation that women sleep with a jade egg in their vaginas I would like to point out that jade is porous which could allow bacteria to get inside and so the egg could act like a fomite. This is not good, in case you were wondering. It could be a risk factor for bacterial vaginosis or even the potentially deadly toxic shock syndrome.

Regarding the suggestion to wear the jade egg while walking around, well, I would like to point out that your pelvic floor muscles are not meant to contract continuously. In fact, it is quite difficult to isolate your pelvic floor while walking so many women could actually clench other muscles to keep the egg inside. It is possible the pained expression of clenching your butt all day could be what is leading people to stare, not some energy glow.

Overenthusiastic Kegel exercises or incorrectly done Kegel exercises are a cause of pelvic pain and pain with sex in my practice. Imagine how your biceps muscle (and then your shoulders and then your back) might feel if you walked around all day flexed holding a barbell? Right, now imagine your pelvic floor muscles doing this.

For women who want to use a device to help with Kegel exercises I suggest using weights made with medical grade silicone or plastic and to not wear them for long periods of time. Kegel exercises are not just about the contraction, the relaxation phase is just as important.

The only thing your post got right is to check with your doctor before using one. So let me give you some free advice, don’t use vaginal jade eggs. 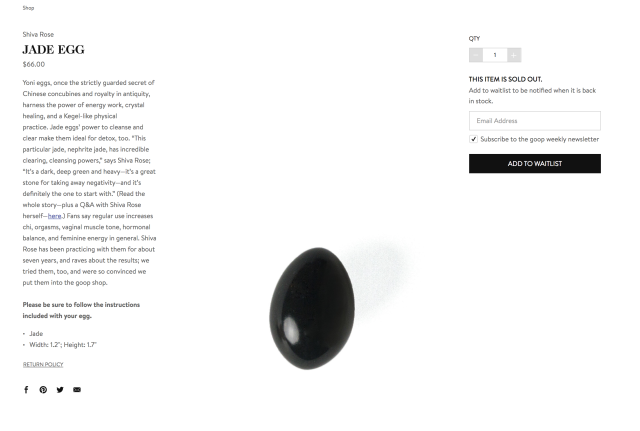 488 replies on “Dear Gwyneth Paltrow, I’m a GYN and your vaginal jade eggs are a bad idea”