A common myth is that there are thousands and thousands of “nine month”or “late-term” abortions every year in the United States.In fact, every time I write on the subject I get comments like this one, regarding “partial birth abortion,”

or this one regarding abortions at term. 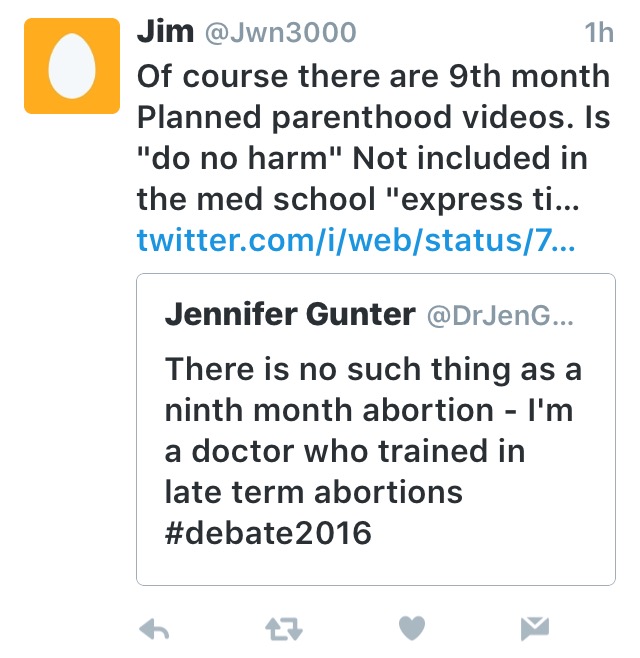 Fortunately there is actual data to tell us how many abortions are performed every year and at what gestational age. And no, we don’t get this data from ex-employees or YouTube, we can get it from the Centers for Disease Control. I will assume for these purposes that late-term means at or after 24 weeks (i.e. after viability). And as an aside the “Planned Parenthood video” that showed a delivery looked like a premature non-viable delivery, a far cry from term or “nine months” with no evidence at all to suggest it was an abortion.

Seven states and the District of Columbia currently have no gestational age limit for abortion. It would then only be in these states that post viability abortions would be happening. Other states do have some exemptions, for example Arkansas and Utah allow later abortions in cases of rape or incest, and some states have later-term exceptions for lethal anomalies (obviously a fetus with a lethal abnormality isn’t viable). I am not going to include those as gathering the data seems impossible as the CDC reporting doesn’t include a reason for the termination and doesn’t have a post 24 week category. For those with issues over terminations for lethal anomalies (for example anecephaly or holoprosencephaly) I will assume you also have an issue with the daily practice of not resuscitating non viable births.

We are supposed to believe that the abortions “on YouTube” and in the “ninth month” are normal pregnancies or pregnancies with very little that is wrong and that there are lots of them. Right up to the due date. If abortions for non lethal anomalies are happening after 23 weeks and 6 days they will be happening in the states with no restrictions. So I looked at the CDC data and pulled the number of procedures at or after 21 weeks for the States that have no gestational age limit (the data isn’t broken down any further). There was no 2012 data for D.C. and New Hampshire as they either did not report, did not report by gestational age, or did not meet reporting standards (not possible to know). For D.C. and New Hampshire I went back to 2009 and also looked up all the clinics to find the gestational age limits to try to get at least some data.

This is what I found for 2012, the last year with published data:

West Virginia and Mississippi didn’t have gestational age limits in 2012 although they do now so I didn’t include them as neither reported abortions at or after 21 weeks in 2012 so it’s a bit moot. Oregon does not appear to have a practitioner specializing in later term abortions, although abortion data from the State is hard to get. Only one clinic does abortions up to 24 weeks. There may be some post 24 week procedures at hospitals in Oregon, but likely less than the other states.

Of the 699,202 abortions reported to the CDC in 2012, 0.17% were at or after 21 weeks and occurred in a state where it was possible to have a post viability abortion for any reason.  We know from other data sets that many procedures at or after 21 weeks are for fetal anomalies (some say about 80%) and many of these are before 24 weeks. A review of data from one clinic that does abortions after 24 weeks in a state with no gestational age limit shows a median gestational age of 22 weeks. It is a likely a fair extrapolation that all clinics specializing in later term procedures have a similar medial gestational age. Using all the available data it would be fair to say that at least 50% of the 1,186 procedures are < 24 weeks, but that may be higher.

The more advanced the procedure the more likely there is an anomaly. While most abortions at or after 24 weeks are for fetal anomalies there are definitely a few of these later procedures because of rape (especially among minors who may have been raped by a family member and are afraid to come forward or who were originally not believed), possible a few for mental health issues, and also because of delays in diagnosing pregnancy although these seem to be the exception.

Whatever your views on choice support your side with accurate statistics. There are obviously very few post 24 week pregnancy terminations in the United States. Most of the 1.3% of abortions at or after 21 weeks are for anomalies and the vast majority are before 24 weeks. There are approximately 600 abortions a year after 24 weeks and most are for fetal anomalies.