I understand you recently said that anyone who is going to fuck with you better bring their A game. 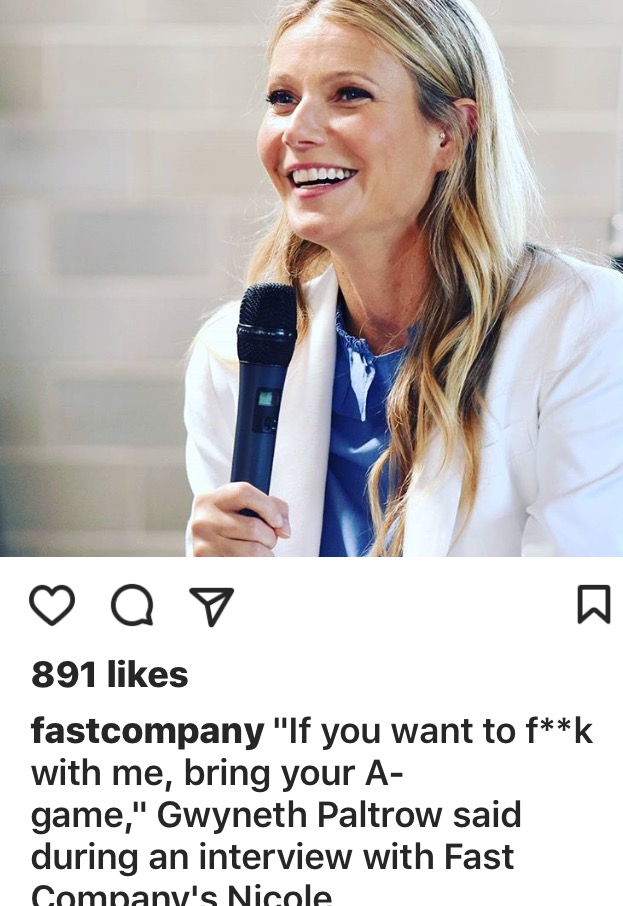 I’m pretty sure you don’t mean comment on your recipes but rather the growing exasperation from medical professionals and journalists alike at the almost constant debunking of the health “advice” and all around medical bullshit that you and your pals at GOOP promote and sell. No, we don’t have adrenal fatigue we have goopitis.

When I tell you that alcohol is a toxin I am not fucking with you I am being factual. Do you really think everything in the world is a toxin except alcohol and botulinum toxin? You worry so much about toxins that you constantly need to “cleanse,” but if someone were to get inTOXICated at your worried wellness GOOP cash grab in June you’ve got them covered with an intravenous. There are only three ways that wasted wellness fits in with your toxin phobia, you are incapable of understanding the definition of toxin, you are under the mind control of charlatans, or you are willfully spreading misinformation. I’m happy to entertain a fourth if you’ve got one.

What do you possibly have to gain by spreading lies to women about bras causing breast cancer? Ever had a breast cancer survivor cry in your office worried that she caused her cancer by wearing bras for 20 years? Probably not. I have. When you give your platform to crackpot theories about bras and breast cancer you are literally fucking with breast cancer survivors. Is this fun for you? Is this your A game? And no, it’s not an “alternative theory” or “backed by research.” This kind of fear mongering causes so much distress that researchers have to do special studies even though the idea is biologically implausible and not supported by the myriad of research already available. I can think of better ways to spend those breast cancer research dollars.

From tampons to tomatoes to toxic lube your website is a scare factory. Literally. It’s either made up (often poorly, but with liberal use of the word toxin) or someone’s hypothesis with little to no supporting data. Tampons are not vaginal death sticks, vegetables with lectins are not killing us, vaginas don’t need steaming, Epstein Barr virus (EBV) does not cause every thyroid disease, and for fuck’s sake no one needs to know their latex farmer what they need to know is that the only thing between them and HIV or gonorrhea is a few millimeters of latex so glove that shit up. Here’s an A game pro tip for you, if you are writing a “sex post” use an expert who actually knows that the WHO has guidelines on lubricants. Your post on lubes is so bad it’s a joke.

You have the gall to tell people like me that we better bring our A game when you bring ghosts and magic to the table. Literally. You promote a ghost whisperer and crystals and of course jade eggs that one recharges with energy from the moon. Really, a dude who talks with ghosts, Naturopaths, and a jade eggthusiast who has a certification from the school she founded is on your A squad?

Did you ever wonder why the only medical experts you interview or promote are fear mongers who coincidentally have something to sell? Candida! Lectins! Parasites! I regret that I have to be the one to inform you my dear, but the sky is not falling. Have you ever asked yourself, “Why are my only experts in concierge practices?” or “Why aren’t there any doctors who work at a University who think EBV causes every thyroid disease?” or “Wow, I wonder if there could be something to all this criticism from people with tons of letters after their names and maybe I should at least read up a bit as this is my mission?” or “Why doesn’t Medicaid cover goat milk therapy?” If you commented on my acting or told me how to pose for a headshot I’d listen because you are an expert in those areas.

And ancient therapies? Girl, you love those. This means that you want your medicine from before we understood that bacteria and viruses were a thing, like when people thought tuberculosis was caused by vampires? What about trepanation or drinking Gladiators’ blood? Those are ancient therapies. Are they in your rotation? Honestly, it’s like you and your experts use Horrible Histories as a reference.

Your goopshit bothers me because it affects my patients. They read your crackpot theories and they stop eating tomatoes (side note, if tomatoes are toxic why do Italians have a longer life expectancy than Americans?) or haven’t had a slice of bread for two years, they spend money on organic tampons they don’t need, they ask for unindicted testing for adrenal fatigue (and often pay a lot via copayments or paying out-of-pocket), or they obsess that they have systemic Candida (they don’t). I have a son with thyroid disease and I worry that in a few years he might read the kind of batshit crazy thyroid theories you promote and wonder if he should stop his medication and try to cure the chronic EBV that he doesn’t have. I also worry that science will have to spend more and more resources disproving snake oil as opposed to testing real hypotheses. I worry that you make people worry and that you are lowering the world’s medical I.Q.

It is hard for people to hear that what they are doing medically is a waste of time. Trust me, I have to tell people they can get the same pelvic floor with free Kegel exercises as they can with your $66 jade egg. I have to tell people that they could have eaten bread and had a beer now and then because they don’t have systemic Candida and even if they did that wouldn’t have been how we would treat it. I know it is hard for you to hear that goat milk can’t cure the parasites causing the adrenal fatigue that you don’t have, probably even more so for you because the paranoia pathway and worried wellness pay swell. However, have you ever wondered why a woman (meaning you) who can work out for hours, eats a reportedly healthy diet, lives in a meticulous house, and isn’t overweight is simply so ill with adrenal fatigue, toxins, and parasites? Could it possibly be that you are getting bad medical advice? It is also entirely possible that you are just laughing all the way to the bank.

It does not take my A game to counter the snake oil, biologically implausible theories, incorrect information, and magic that you and GOOP pass off as health advice. Really, I’m not sure it even takes my C game. It might take a game, like Clue, but that’s about it.

We’re not fucking with you we’re correcting you and you know what? We’re not going to stop.

*May 24, 2017: Correction, this post has been updated to reflect the fact that GOOP claims the energy of jade eggs is recharged by the moon and not the sun.

183 replies on “Dear Gwyneth Paltrow we’re not f**king with you we’re correcting you, XOXO Science”