A few like minded scientists and I were discussing unproven stem cell and platelet rich plasma (PRP) injections on Twitter when Dr. Runels, the inventor of the “O Shot®”, inserted himself into the conversation to correct me and laud the benefits of his patented PRP procedure that he advertised can “improve sex and cure urinary incontinence.”

When I asked him to provide a study other than the promotional material on his website and why his address is Medical School, Birmingham when that isn’t an accredited medical school I was blocked.

But my interest was piqued. I’d been meaning to look at little further into the “O Shot®,” an injection into the clitoris and anterior vaginal mucosa and this is what I found

What is platelet-rich plasma?

Platelet rich plasma or PRP is “trendy” now (side note, I like my medicine safe and effective not trendy). Basically it is the liquid part of the blood (plasma) enriched with platelets (small cells that help makes the blood clot). The red blood cells and white blood cells have been removed. It has high concentrations of fibrin (a substance that makes the blood clot) and various growth factors that help with healing. When it is given in a medical procedure the blood is removed from the patient, the red blood cells and white blood cells are removed and and then the PRP is given back to the same patient.

It sounds great on paper. Nature’s healing! Except there is very little proof that it helps anything. Currently PRP has been tested for chronic non healing wounds and for sports injuries and the evidence has been less than impressive.

Lots of therapies sound good on paper, but when they are put to the test they don’t work or the studies are never robust enough to say either way. Sometimes when we test things we also find unanticipated bad side effects. Just because it is an autologous (your own) blood product doesn’t mean it can’t be harmful. Could the concentrated clotting factors cause blood clots? Could it lead to unregulated tissue or blood vessel growth and cause pre cancerous cells to become cancer? Could it trigger harmful inflammatory responses? All of these are just a theoretically plausible as the proposed health benefits. Remember, many people thought anti-oxidants were great, until a study showed they are better for cancer cell growth than healthy cells. Medicine is filled with abandoned therapies that were too much of a good thing.

If bathing injuries with plasma were nature’s miracle I think we would have evolved that way. But hey, study it and prove me wrong!

What does platelet rich plasma have to do with the vagina and sex?

Dr. Charles Runels states that he invented the “O Shot®” and patented it. Anyone with a medical degree can of course inject PRP into vaginal tissues, but you can only call it the “O Shot®” if you have made some kind of arrangement with Dr. Runel.

The only study of vaginal injections listed on Dr. Runels’ web site is in the Journal of Women’s Health Care, an open access journal from OMICS Publishing group, which has been listed as a potentially predatory journal. As the journal isn’t indexed by the national library of medicine it doesn’t meet my standards for “journals I should be reading.” Potentially predatory journals are a concern. Many reporters who write about therapies don’t check the journal out and certainly many patients don’t know the difference. Many doctors don’t either.

Regardless of the journal, it is a stretch to call this paper a study, it’s a case series of 11 women with a variety of sexual complaints ranging from dyspareunia to orgasmic disorder. The sexual dysfunction experienced by a woman with dyspareunia (never mind that there are a multitude of very different conditions that can cause dyspareunia so it really shouldn’t be a single diagnosis in a study) can not be compared with the sexual dysfunction of a woman with an arousal disorder. The study has apples and oranges and pears all lumped in together.

The results? Of the 11 women, 64% reported some kind of improvement, but honestly the statistics are of no value given the small sample size and the fact that there are four very different diagnoses lumped together. I also can’t tell if it was retrospective or prospective. Two women who had “minimal” pro procedure dysfunction reported extreme arousal for 1-2 weeks afterwards. This is the only bad effect noted in the 12-16 week follow up. The paper has a very short follow up, but Dr.Runnel’s website claims the “O Shot®” lasts at least 18 months but up to three years for some women.

Dr. Runels listed his address on the paper as “Medical School, Birmingham, Alabama, USA.” which is not actually a medical school. Dr. Runels is not a gynecologist, but an internal medicine physician according to the State Board of Medical Examiners in Alabama.

There are two citations using a vaginal application of PRP in PubMed and neither are related to orgasms or using it in healthy tissue. One is appropriately an in vitro study (looking at how PRP might impact the growth of specific cells called fibroblasts in vaginal tissue in the lab). 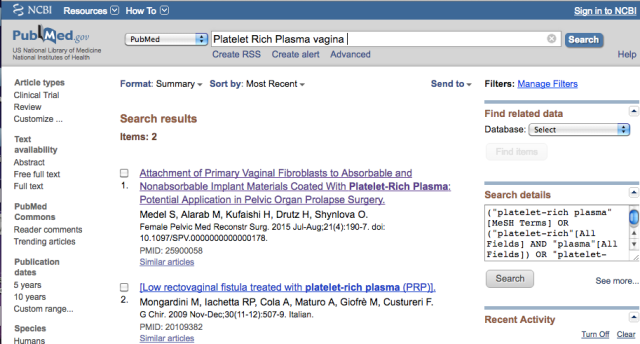 The most concerning thing for me is the lack of animal studies to give us a basic idea of how vaginal epithelium might respond to PRP. The bulk of the published studies involve wounds and tendons/muscles, not healthy vaginal tissue. This is a very important point because it is possible that PRP could increases the growth of blood vessels into vaginal tissues and we don’t know if that is good or bad. If a woman has human papilloma virus (HPV) in her vagina and gets a PRP injection could that cause the HPV to spread or make it more likely to develop into cancer? Could it cause scaring? Could it lead to unregulated growth of nerve endings and cause pain? Could it trigger autoimmune conditions of the vagina or vulva?

And of course does it work and if so for what sub set of women? Obviously, the placebo effect is huge with these kinds of therapies and we know the more things cost the greater the placebo rate. In pain studies placebo response rates can approach 60%, so a well-designed rigorous double-blinded placebo controlled cross over trial would really be needed.

There is very little scientific evidence that PRP does anything beneficial for injured tissue, never mind what it might do to normal vaginal epithelium. While it is biologically plausible that a therapy that improves vaginal blood flow or impacts cytokines could improve orgasm, there are also lots of biologically equally if not more plausible safety concerns.

A few years ago it was The “G shot,” which was collagen injected into the anterior vaginal wall. Margaret Cho wrote about her less than stellar experience with it and her experience reflects what I have seen.

Dr. Tim Caulfield summed up the Twitter discussion with a handy infographic and I love his quote, that PRP for female sexual dysfunction is a good “example of how bad science, social media, and questionable publications can be used to legitimize and market unproven therapies.”

Is the “O Shot®” effective? No data. It is safe? Who knows? It it worth studying? If animal data suggests it doesn’t cause unregulated growth of fibroblasts or nerves and we have an idea that it won’t trigger HPV then maybe.