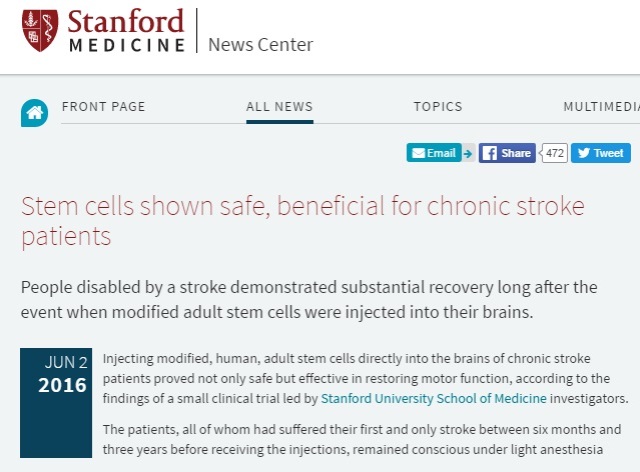 A new study on a small group of patients with a history of stroke and significant motor deficits has produced astonishing results. Adult stem cells were injected directly into the stroke damaged area of the brain for eighteen patients who were 6 months to 3 years out from their stroke. Patients had clinically meaningful recovery. Body parts rendered non functional by the brain damage worked better. People who were in wheelchairs walked. And the improvement lasted for at least 12 months.

To say this is amazing is an understatement. Until now the prevailing belief has been dead brain tissue is done. While neuroplasticity (the ability of other areas of the brain to adapt and learn to take over other functions) might allow for some recovery, typically those gains are seen in the first few months of rehab. After six months gains are minimal at best. And because younger brains are more plastic older patients tends to have worse recoveries. In this study age didn’t matter (another stunning finding).

This study was a phase 1 study, meaning it was a test mostly to see if the procedure of drilling a small hole into the skull and injecting the stem cells was safe, to measure the risk of infection or rejection and to look for unforeseen consequences. Nothing bad happened so the researchers are now recruiting more patients for a larger study.

What does this have to do with fetal tissue research, after all the study used adult stem cells.

Now we know that stem cells can make a damaged area of an adult brain recover, that something we thought was forever lost isn’t. Even if it is only temporary that is huge, because something that we thought was basically impossible isn’t.

We need to know more. To learn more things about how the brain recovers. To discover more ways to help people. The study is a like a neon sign that says You might want to look over here. Even if it doesn’t turn out to be stem cells we might find that a neurochemical triggered by the stem cells caused the change and be able to replicate the chemical in the lab. It’s possible the process of injecting something triggered the change and maybe stem cells aren’t even needed. We won’t know until we study it more.

Fetal stem cells may work better for adult stroke survivors. We won’t know until we study it. After all, we didn’t know adult stem cells could work until they were tried. Fetal stem cells have shown some early interesting results for people with ALS, so it is not any kind of leap that they could help with stroke.

And what about babies born with cerebral palsy or those who suffer brain injury due to prematurity? Would fetal stem cells work better for a 2 month old than adult cells? Intuitively I would say yes, but again we won’t know until we study it.

I have a son with cerebral palsy and another one with different motor defects due to prematurity. They have made amazing gains with physical therapy, but what about those babies with more severe deficits? Could we take a baby destined to a life in a wheelchair and tube feeding and give him or her more? Could we take a baby with periventricular leukomalacia due to prematurity who is destined for a life of blindness and give sight?

We won’t know until we study it.

Republicans in the House don’t want it studied. They have created the Select Investigative Panel on Infant Lives, a politically motivated attack on Planned Parenthood and a back door way to get at abortion while tip toeing around Roe. v. Wade. Representative Marsha Blackburn is on the panel and wants to stop the “for-profit business model” of “selling baby body parts.” It is worth mentioning that Ms. Blackburn is either indifferent to the fact or unaware that multiple State level investigations have found no illegal activity, specifically selling tissue for profit did not occur and that she obviously doesn’t know what the term fetal tissue means, yet she wants to make decisions.

What the members of this panel want is votes and attention for fundraising from an anti-abortion base, the fact that a valuable area of research will be lost matters not.

Adult stem cells can help injured brains. We now know this is a valid area to explore with further research. To not use fetal tissue that women wish to donate for science to further explore this area of research, for adults and children, would be a tragedy. There is great potential here.

The only potential that Blackburn and her ilk are interested in is the fund raising potential that the Select Investigative Panel on Infant Lives provides.