I was recently sent YET ANOTHER puff piece on the “O shot®.” For those of you fortunate enough not to have space in your brain taken up rent free by the “O shot®” it is an injection of platelet rich plasma (PRP) into the vagina and clitoris that claims to bring rocking orgasms to women.

Honestly, these pieces enrage me. They read like a press release from the doctor offering the procedure with a cautionary note from the American Congress of OB/GYN (ACOG) tacked on at the end, so in the wasteland of the Internet, stating this is unsafe and untested. But hey orgasms, right! Page clicks!

I’ve written on the lack of science behind the “O shot®” before, but this time I took a deeper dive into the back story and the background of Dr. Charles Runels, the “inventor.”

This is what I found.

First of all, there is STILL no science that supports the O shot

I need to get this information out front, because this most recent piece on the “O shot” starts off claiming it is backed by “medical science.” This is untrue. Fake news. A lie. Shoddy reporting. Take your pick.

To say something is backed or supported or can be achieved by medical science you would need at least one quality study to support it. There are no studies in indexed, peer-reviewed literature looking at injecting platelet rich plasma into the vagina or clitoris to improve sexual satisfaction. There are not even any studies in animals telling us what, if anything, PRP does to vaginal tissue.

There are three studies, one looking at biopsies in a lab, one with three women so not even a study, and the other on rabbits. All of these are looking at PRP to see if that could reduce mesh-related inflammation and are not about orgasms. Also, the proposed “hypothesis” behind the “O shot®” seems a bit of a stretch.

There are a few low quality publications looking at it for lichen sclerosus with low quality results. Regardless, that indication is not orgasmic dysfunction. 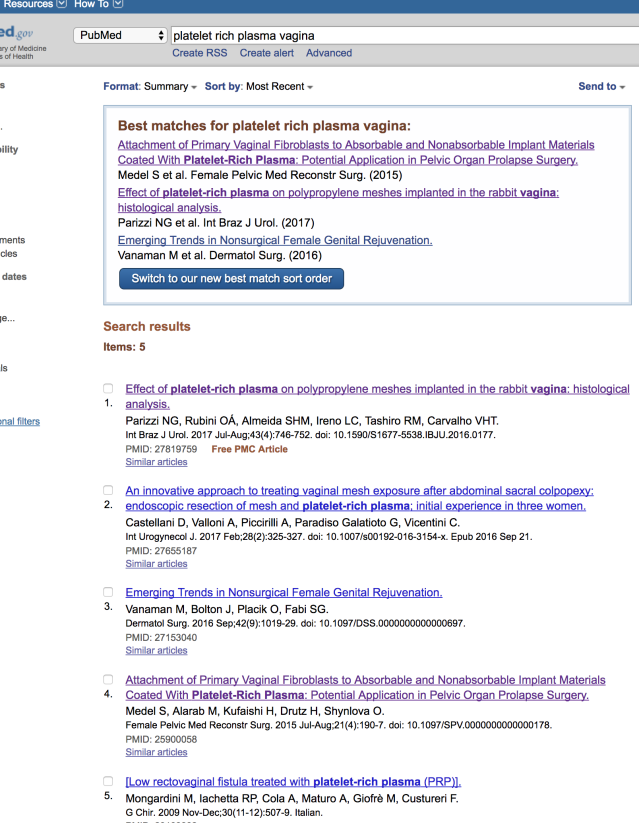 This is the supporting “study” offered by Runels when I questioned him via Twitter. It is in a non indexed journal and is a case series of 11 women with four different diagnoses (one cannot compared the sexual dysfunction of pain with sex with that of orgasmic dysfunction). Of the 11 women, 64% reported some kind of improvement, but I can’t tell if this is retrospective or prospective data. Also, no IRB was involved.

I would ask Runels more, but he blocked me.

I will be forever stunningly amazed that he listed his office as “Medical School” and that he repeatedly misspelled dyspareunia in the paper.

So platelet rich plasma in the vagina and the clitoris is a shaky hypothesis not science.

Just a side note on platelet rich plasma in general. There is no good science to support it helps much of anything. This of course does not stop the press from suggesting that it is routine therapy.

Dr. Runels apparently got interested in genital PRP because he was injecting his own penis. The first clitoris he injected was his sex partner’s

Yes, you read that right. It is from The Guardian. It is the first paragraph in the piece.

When I heard that information I was shocked. Once you do a procedure on a person they become your patient. Doing non-emergent gynecologic procedures on sex partners, never mind completely experimental ones, is generally frowned upon. For example, I was taught if your sex partner gets pregnant and they want an abortion you refer them to another provider. It was drilled into me during my training that the power dynamics, bias, and objectivity are simply impossible to navigate with GYN procedures and sex partners.

This is what the AMA says:

The FDA and Dr. Runels

In 2008 the Food and Drug Administration notified Runels that they were initiating disqualification proceedings against him. Among their concerns that he checked “no vulnerable populations” on the IRB application and then subjects were recruited from a center for the homeless. 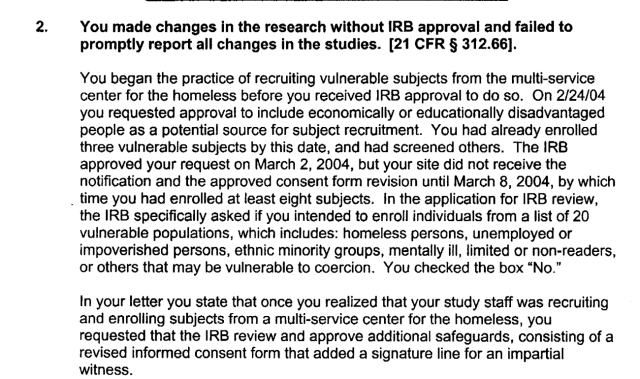 The eight page letter to Runels from the FDA also says he failed to promptly inform the IRB of serious adverse events and it goes on to describe many other concerns.

Dr. Runels defended his actions to a reporter claiming, “he wasn’t aware that the volunteers in the vaccine trial were homeless, as addresses were being checked by the company running the trial” although he admitted he “was responsible for everything, which is why I got burned.”

It appears Runels was disqualified from being a clinical investigator in 2009.

Dr. Runels and the Alabama State Board of Medical Examiners

The way Dr. Runels practiced medicine drew attention from the State Board of Medical Examiners of Alabama. In 2009 he was fined $5,000 for misuse of hormone replacement therapy. He “overdosed” two women with testosterone and was restricted from prescribing hormones. In 2011 the Board made an exception for thyroid hormone and testosterone in deficient patients.

Here is what you need to know about the “O shot”

The hypothesis involves significant leaps of faith. This means it must be studied not promoted as legitimate therapy by doctors hoping to cash in on sexual difficulties.

There are no studies at all suggesting the “O shot” improves orgasm or sexual function.

There is no animal or human data suggesting it is safe to inject in vaginal epithelium or into the clitoris. Who knows if this could spread the human papilloma virus or herpes to other areas of the lower genital tract? I can think of a thousand ways this could harm women, but then again I am an appropriately confident OB/GYN not an internal medicine doctor or a plastic surgeon.

The way Dr. Runels prescribed hormones was apparently egregious enough to catch the eye of his state medical board. His license was restricted to stop him prescribing hormones from 2009-2011. He is apparently now allowed to prescribe thyroid hormone and testosterone in specific situations.

Dr. Runes was disqualified in 2009 by the FDA from being a clinical investigator.

And yes, the leading group of OB/GYNS says it is “deceptive” to suggest procedures like the “O shot®” are “accepted and routine surgical practices.”

Do doctors doing the “O shot” and reporters covering it not know or don’t they care?

That to me is really a million, or probably more, dollar question. It honestly makes me very sad. I found all this information in less than an hour. But hey orgasms, right?

If a doctor recommended the “O shot” to anyone I know my advice would be to get up and walk out the door.