Gwyneth Paltrow recently claimed her detractors don’t do their homework and are afraid of empowered woman. She stated:

“The difficulty is that you’re suggesting that people have autonomy over their health and some people love that and some people are like, ‘fuck you, just write me a prescription.'” she says of “challenging medicine as it is.”

And about the negativity and criticism…

“just isn’t about us, because we’re very clear about everything we’re doing, we stand behind everything we do.”

“I wish that people would actually like read the article or do their homework before they are vitriolic about it because a lot of times they’re not even really addressing what’s on the website…but at the end of the day, your work stands for itself.”

Ok then. Let’s look at the latest health offering on GOOP, a mosquito repellent, with those assertions in mind.

Mosquito repellent is an important health aid, especially given the introduction of Zika in the United states and of course when people travel out of the country they may expose themselves to other mosquito born illnesses such as dengue and malaria. Accurate information on repellent is important. Sadly I have know people who have refused repellent, even when traveling to Zika endemic areas, because of unfounded fears of hidden “toxins.”

The product promoted and conveniently sold on GOOP is called Jao Patio Mist and is “infused with lemon-eucalyptus oil,” is marketed as being “without toxins,” and sells for $32 for 4 ounces.

The facts, which I know because I did my homework, are as follows:

No mosquito repellant contains toxins so that is a deceptive marketing ploy.

OLE is a naturally occurring compound from the gum eucalyptus tree and the active ingredient that it contains is the biopesticide p-Menthane-3,8-diol.

Products that contain 30% oil of lemon eucalyptus (OLE) did well in Consumer Reports testing, warding off mosquitos for 7 hours. The Environmental Protection Agency also recognizes many products with 30% OLE as being effective repellents and has a database for consumers of products with the correct percentage that meet EPA standards.

After doing my homework (a.k.a. research) I can draw the logical conclusion that the GOOP promoted product is not listed because it only has 20% OLE.

There are more effective and way cheaper OLE products

If using a biopesticide is for you Consumer Reports has you covered for $4.97 with Repel Lemon Eucalyptus which has 30% OLE and did well on their tests. It is also on the EPA list. 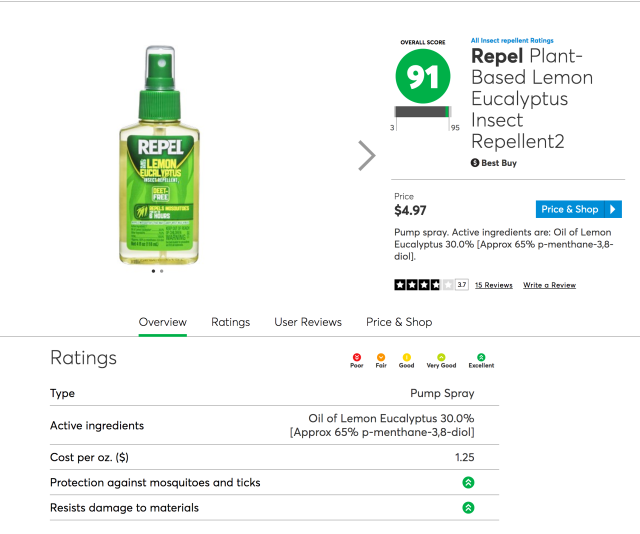 Repel is $1.25 an ounce and is effective and the GOOP recommended product Jao is $8 an ounce and does not contain enough OLE to be considered effective enough.

Hmmm. That is troubling.

Why can’t GOOP just do the right thing and promote the safer, cheaper OLE product?

Promoting a less effective yet more expensive mosquito repellent or telling women bras cause cancer or that everyone is infested with parasites that only goat’s milk can cure or shilling for band aids made from fabric with special fake NASA healing powers or claiming that tampons have toxins (I could go on, but you get the point) is not challenging medicine it is either a complete ignorance of basic science and the end result of zero homework, willful promotion of incorrect information or both.

Paltrow claiming her critics haven’t done their “homework” is laughable. Every single person who has written about GOOP’s ridiculous claims has “like read” the offending article and often multiple times because they just didn’t believe that sequence of words could be used outside of a comedy routine. In addition, Paltrow herself has stated she didn’t know what the “fuck” they did at GOOP. People who do homework don’t say things like that. I know because I am a homework aficionado.

The standard definition of feminism is to advocate for women’s rights based on equality, however, it can obviously mean different things to different people. Promoting and capitalizing on fear (for example the idea that bras cause breast cancer or that tampons are filled with toxins) or selling women more expensive yet less effective mosquito repellant is simply not feminism it is grifting.

Of course people have autonomy over their health but autonomy involves an informed, un-coerced decision (someone should really get Paltrow a dictionary). Unsubstantiated claims with no science to back them up or low quality science published in low quality journals like JISM passed off as high quality data packaged with the lure of celebrity is not how people make informed decisions. If a woman used the GOOP endorsed mosquito repellent because she believed Paltrow stood behind her products, was infected with Zika and then later delivered a baby with severe birth defects would that woman feel that her decision to use an inferior product was rooted in autonomy or in deception?

The only thing feminist about GOOP and Paltrow is their desire to be the female version of Infowars and Alex Jones.