The site Lifehacker suggests that women could hack their periods by using make-up sponges vaginally as menstrual hygiene products. This could even give one “bloodless” period sex.

This information comes from our learned expert, nameless “sources.”

Make up sponges are most commonly made of polyester foam (polyurethane) although apparently there are latex sponges as well.

After there was some concern raised online about the safety and sanity of this recommendation the reporter asked an OB/GYN who said “makeup applicators and sea sponges aren’t particularly worse than a tampon” and tampons are “nothing special” when it comes to bacterial infections so insert away.

(Gets light headed from all the cleansing breaths).

The Food and Drug Administration (FDA) considers tampons to be Class II medical devices and as such they have very specific safety testing requirements and standards. Menstrual hygiene products (including the sea sponge) and the contraceptive sponge have all been associated with toxic shock syndrome. So the FDA and the OB/GYNS I run with actually do consider tampons something special and as such they are deserving of our scientific attention. In other words, in an industrialized society with access to tested products menstrual hygiene should not be the stuff of “hacks.”

It wasn’t always this way. In the 1970s, when tampons were considered “nothing special” by the FDA Proctor and Gamble decided they wanted to get into the tampon game. To do this they wanted a tampon to set themselves apart from the others. They wanted one so reliably absorbent that it even absorbed “the worry.” Ha ha.

Proctor and Gamble wanted a new, bold, disruptive tampon so I guess you could say they wanted to hack menstruation. They innovated by changing tampon materials and design in essentially every way. The product that came from this quest for ultimate dryness was the Rely tampon made of polyester foam cubes and chips and carboxycellulose (a gelling agent) wrapped up in a teabag like polyester pouch.

Because the initial tests on Rely were completed by 1974, before tampons were legally a “big deal,” the product was allowed to be grandfathered in by the FDA with inadequate safety data. Guess what happened next? The incidence of menstrual toxic shock syndrome (mTSS) skyrocketed to 13.7/100,000 in 1980. For reference it is 1-2/100,000 right now.

The exact mechanisms that Rely increased mTSS is unknown. Hypotheses include increased bacterial adherence to the polyester foam or the gel agent (or both), the absorbancy may have helped with bacterial growth, or the impact of the significantly more air trapped by the polyester foam versus a cotton or rayon tampon. Oxygen is a co-factor in development of mTSS.

I popped a make-up sponge in a beaker just to see how much air might be trapped and I was astounded at the amount of gas released. I did the same experiment with a super plus tampon and I saw no bubbles.

What if polyester foam bothers you because McChemicals? No worries, Lifehacker suggests sea sponges without informing the reader that a study from 1982 found users of sea sponges for menstruation were significantly more likely to test positive for Staph aureus (the bacteria that produces the toxin that causes mTSS) during menstruation than those using tampons (24% of sea sponge users versus 5% of tampon users). As there was no difference in Staph aureus when the women were not on their periods (and thus not using menstrual products) this dramatic bump with sponges versus tampons can only be sponge related.

It is not a “hack” to suggest women use make-up sponges or sea sponges for their period it is a gross disregard of the evidence that is currently available and a disservice to women. It is incorrect to say tampons are “no big deal” when the FDA requires extensive data regarding product safety, such as this. 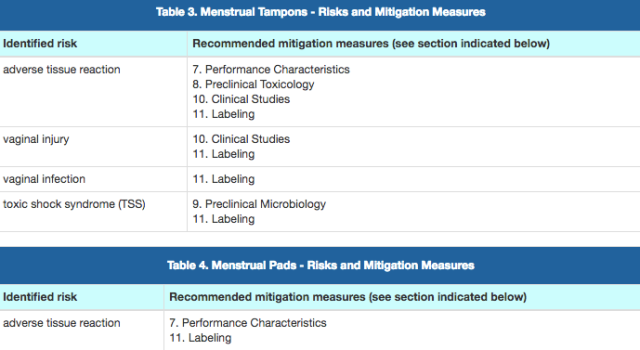 And lets not forget this specific attention to microbiology in the FDA menstrual product approval process. To me this says “big deal.”

Lifehacker should remove the article. It is not acceptable to fail to inform your readers about the fact the polyester foam material you are suggesting for menstrual hygiene has been implicated as a causative agent in mTSS. It is also not okay to imply that makeup sponges and sea sponges are the same as tampons safety wise because they are not. If your expert doesn’t know that tampons are class II medical devices, that they require safety testing, and that the introduction of oxygen is believed to be a critical step in menstrual TSS then there is an issue.

I advise against using make-up and sea sponges vaginally. Oxygen is not your vagina’s friend but I am.