Dr. Ben Carson, GOP nominee hopeful, told Fox’s Megyn Kelly that “There’s nothing that can’t be done without fetal tissue” and that the benefits of fetal tissue have been “over promised” and the results have “very much under-delivered.”

Carson also said, “At 17 weeks, you’ve got a nice little nose and little fingers and hands and the heart’s beating. It can respond to environmental stimulus. How can you believe that that’s just a[n] irrelevant mass of cells? That’s what they want you to believe, when in fact it is a human being.”

Dr. Carson, like everyone, is entitled to an opinion no matter how wrong, What he says doesn’t change the fact that fetal tissue  plays a vital role in medical research. For example it is being used to develop a vaccine against Ebola. Many researchers depend on fetal tissue to understand and hopefully develop treatment for a myriad of conditions from blindness to HIV. Without fetal tissue neurosciences research, something essential for the development of neurosurgical techniques, would be far less developed. Dr. Carson should be intimately aware of this fact.

While opining on the uselessness of fetal tissue research to Megyn Kelly Dr. Carson neglected to mention his own paper Colloid Cysts of the Third Ventricle: Immunohistochemical evidence for nonneuropithelial differentiation published in Hum Pathol 23:811-816 in 1992. The materials and methods describe using “human choroid plexus ependyma and nasal mucosa from two fetuses aborted in the ninth and 17th week of gestation.” 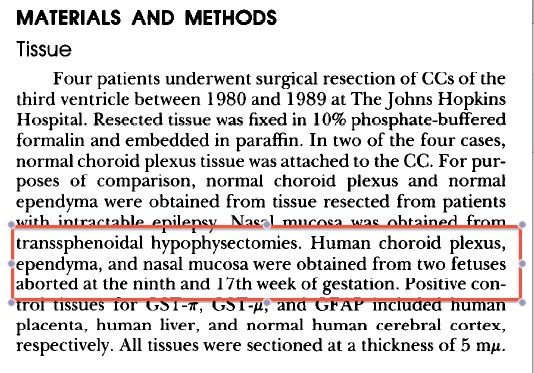 Yes, Dr. Ben Carson has done research on fetal tissue and published his findings. His name is on the paper so that means he had a substantive role in the research and supports the methods and findings.

How does one explain this given Carson’s stand on fetal tissue research?

Perhaps Dr. Carson feels that only his work delivered the goods and all other researchers have produced inconsequential work,  an Ebola vaccine clearly not of merit by Carson’s logic.

Could he think his own research was useless? However, if it was non contributory to the field why was it published?

Maybe he forgot that he’d done the research on fetal tissue? Convenient I suppose if you are a Presidential hopeful and want to use your doctor credentials to get prime Fox and Brietbart space and there is a fetal-tissue-for-research issue.

It could have been some resident research paper that just needed a faculty member and he was sympathetic so got stuck with the job, but then again if you are running for President shouldn’t you know your own CV? And there is still that sticky issue of why add your name if you find fetal tissue research so unnecessary?

Might he feel that fetal tissue research was ok then, but not now? Using that logic we must have learned everything about medicine by 1992 and now we’re just working out the kinks while waiting for the cure for Alzheimer’s, HIV, and Parkinson’s to drop from the heavens.

As a neurosurgeon Dr. Ben Carson knows full well that fetal tissue is essential for medical research. His discipline would have a hard time being were it is today without that kind of work. What is even more egregious than dismissing the multitude of researchers whose work allowed him to become a neurosurgeon is the hypocrisy of actually having done that research himself while spouting off about its supposed worthlessness.

Due to the increasing number of hateful comments and personal attacks comments are no longer allowed on this post. Ad hominem attacks mean you have a weak  argument and frankl;y I’m just not interested in the vitriol.

I just pointed out that Dr. Carson’s vocal position on fetal tissue research seemed incongruous given A) his career as a neurosurgeon depended on embryology which required lots of research on fetal tissue and B) the fact he is an author on a paper that used fetal tissue for research. His claim that he “just” donated adult tissue doesn’t hold water. If he had an issue with fetal tissue he should have made sure he wasn’t contributing in any way to work that he believed had little hope of helping anyone. If he isn’t against fetal tissue research he shouldn’t have told Megyn Kelly otherwise.