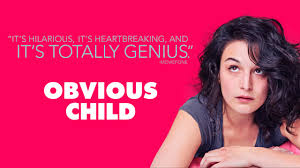 On Saturday I went with my boyfriend and his teenage son to see Obvious Child,  (written and directed by Gillian Robespierre and staring Jenny Slate). The movie is billed as an abortion romantic comedy.

I think a better descriptor is a pretty-close-to-real-life romantic comedy. In fact, Ms. Slate’s performance and many of the scenes were so real that at times I felt as if I were watching a reality TV-like event (that is if reality TV were in any way like real life). I truly mean this in the best of ways. For me the characters, the situations, and the dialogue all rang true. My boyfriend and his son, who are not OB/GYNs or women and so have a far less intimate knowledge of the medicine and this aspect of the private lives of women, also felt it was all very convincing (except one part, and I’ll get to that in a bit).

Since romantic comedies all turn out in a very specific way I don’t consider what follows as a  spoiler of any kind, but if you don’t want to know much about the movie going in then come back and read the rest after you’ve seen it.

The only thing that didn’t ring true for me was the two-week wait after being seen at Planned Parenthood before she could get an abortion. Donna could have had a medical abortion without a wait (although in some states she could have faced a 24 hour waiting period due to legal requirements), regardless I think the two-week waiting period was well used dramatically. After all, not everything in movies has to be 100% accurate. I mean, would Transformers really ride Dinobots to save humanity?

My boyfriend didn’t think the end was believable, that the guy would show up with flowers and accompany Donna to the clinic. First of all, I pointed out that is something he would himself have done. He paused and agreed. Then I added that this is the crux of the romantic comedy genre. Just as Mr. Darcy persists even when rebuffed by Elizabeth (Pride and Prejudice being the epitome of rom-coms), so does Max when he is rebuffed by Donna. Perhaps romantic comedies are in many ways as unlikely as disaster movies, but hey, it’s the formula.