The myth that bras cause breast cancer is apparently coming ‘round the barn again. The latest scare-you-out-of-your-brassiere “article” claims there are “five research studies” that show a strong correlation between bra wearing and breast cancer. Well, that certainly sounds all scientific.

Why the bra hullaballoo? A couple of anthropologists wrote a whole book about their incorrect theory back in 1995, Dressed to kill: The link between breast cancer and bras. Every now and then someone digs it up and it makes for shocking news and more importantly page views. However, a quick look at the claims made by the authors and apparently supported by some naturopaths, midwives, and even Joe Mercola, the Godfather of Woo, shows that they are based in nothing but the desire to sell a book/service/product.

The authors (not medical doctors or cancer researchers) Sydney Ross Singer and Soma Grismaijer from the Institute for the Study of Culturogenic Diseases opine that bras restrict the flow of lymphatic fluid keeping “toxins” in the breast where they can cause mayhem (*note, the use of toxins in a quasi-medical sense is snake oil alert). They compare this phenomenon to swelling in the feet and ankles on long flights. Huh? The complete medical gibberish of this aside if your breasts are swollen when you remove your bra at the end of the day just like your feet on a transatlantic flight then you are wearing a bra about 4 sizes too small. It might hurt, but it’s still not going to give you cancer. This statement also leads me to believe that the woman of this duo must never have actually worn a bra or at least one that fit. I have never, ever heard a woman say, “This bra has made my breasts swell to a disproportionate size.” In fact, if there were a bra that could defy the laws of physics and biology and once removed leave the breast tissue larger for a period of time it might be popular.

Doing my due diligence I decided to check this dynamic duo’s assertions. A quick trip over to PubMed where I 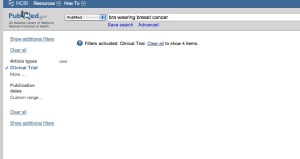 typed “bra wearing breast cancer” into the trusty little search tool, filtering of course for clinical trials, showed, ah, nothing. So then I looked at a multitude of articles on risk factors for breast cancer. Genetics, obesity, larger breast size, sex hormone exposure, breastfeeding, physical activity, smoking, and diet all popped up. Bras? Not so much. I clearly did my research correctly as I found a wealth of articles on proper bra fit for women post-mastectomy and even articles on how discomfort with exercise bras affect how women exercise after breast cancer, but nothing on cause an effect between bras and cancer.

I did find an opinion piece (not a research study) dispelling the whole bra/breast cancer myth from the Mayo Clinic Womens Healthsource from 2002 and because PubMed has a neat little tool that brings up related articles, so I thought I might finally find those five shy “research studies.” Alas, I did not.

Apparently, the authors of the lethal bra book quote a 1991 Harvard study that says bras cause cancer! That sounds legit. The study was published in the European Journal of Cancer in 1991 by Hsieh, Breast size, handedness, and breast cancer risk. The only problem? The study does not say that bras cause cancer, but that larger breasts are a risk factor:

“Premenopausal women who do not wear bras had half the risk of breast cancer compared with bra users (P about 0.09), possibly because they are thinner and likely to have smaller breasts. Among bra users, larger cup size was associated with an increased risk of breast cancer (P about 0.026), although the association was found only among postmenopausal women and was accounted for, in part, by obesity. These data suggest that bra cup size (and conceivably mammary gland size) may be a risk factor for breast cancer.”

Larger breasts have a higher risk of cancer not because larger breasted women are more likely to wear bras or underwires, but because more breast tissue means more cells to potentially go haywire and because obesity is a risk factor for breast cancer (heavier women tender to have larger breasts).

There are no studies giving credence to the biological implausible theory that wearing a bra causes breast cancer. If tight clothing were carcinogenic then breast cancer would be decreasing because in days gone by women were trussed up and strapped down to the Dickens in corsets. And why would this phenomenon be linked with bras alone? What about the dangers of shoes and skinny jeans?

And finally, if lymphatic obstruction caused cancer then people with lymphatic filariasis would have a dramatic increased risk of cancer (they don’t) and lymph node dissection would negatively impact cancer survival (it doesn’t).

So rest assured that your bra is not killing you, unless it’s the wrong size then it might hurt a little.