I am an OB/GYN and a pain medicine physician. I write a lot about sex, science, and social media, but sometimes I write about other things because, well, why not?

I’ve been called Twitter’s resident gynecologist, the Internet’s OB/GYN, and one of the fiercest advocate’s for women’s health. I have devoted my professional life to caring for women.

I’m here to build a better medical Internet. You can’t be empowered about your health if you have incorrect information. I got interested in online snake oil and dubious science when my own children were born extremely prematurely. I found separating the facts from the fiction difficult and I am a doctor, so I started thinking if this is hard for me how does everyone else manage? It put the bad information that my own patients were bringing into the office in perspective. I know people sit up late at night Googling things and fall down rabbit holes of misinformation because I’ve been there!

I first started my quest to help provide quality information by writing a book, The Preemie Primer, a guide for parents of premature babies. After my kids got a little older and we were spending less time in intensive care units (it was a rough first few years) I decided to turn my attention to reproductive health, because it seems the Internet is infested with snake oil and malignant misinformation.

In addition to my academic publications, my writing has appeared in places like The New York Times, The Cut,  USA Today, The Hill, and Self. I broke the news that Dr. Ben Carson had his name on a paper that used aborted fetuses for research (he had claimed that aborted fetal tissues was never needed. Ever.). I took on the Toronto Star (and won) when they published a tabloid worthy piece on the HPV vaccine. I was the person who drew attention to Trump’s information deficient medical letter.

I have a new book that will be published (I hope) by the end of 2018, but check back for updates. It is tentatively called The Vagina (and Vulva) Bible. It’s every single thing I want women (and men) to know about the lower reproductive tract.

I was born and raised in Winnipeg, Canada and graduated from The University of Manitoba School of Medicine in 1990 at the age of 23 (I started young). In 1995 I completed my OB/GYN training at the University of Western Ontario and moved to the United States to complete a fellowship in infectious diseases at the University of Kansas. After completing my fellowship I continued my studies in pain medicine. I am board certified in OB/GYN in both Canada and the United States. I am also board certified in pain medicine by the American Board of Pain Medicine and by the American Board of Physical Medicine and Rehabilitation. That’s why I have so many letters after my name.

I have two boys who are budding skeptics and keep me so honest it hurts and a third who died at birth. That hurts in a different way. I also have a lab named Hazel and a one-eyed cat named Luna who is often the star of my Twitter and Instagram feeds. She was a Handmaid for Halloween this year! 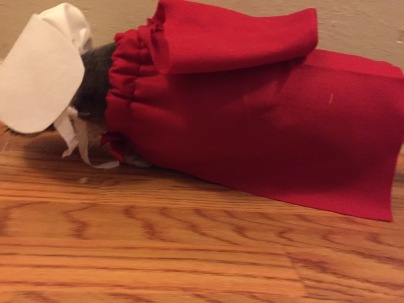 Thanks for reading and sharing!