There have been a lot of lies circulating about abortion since New York State passed a law allowing abortion after 24 weeks if the health of the mother is at risk or if there are lethal fetal anomalies.

This does not mean that ladies who just forgot their 8 week abortion who are now struggling to fit into their pants can get their better-late-than-never abortion. It means doctors can do the right thing medically if the situation arises and women with lethal fetal anomalies at or after 24 weeks will not have to travel to New Jersey or elsewhere for an abortion. It also offers protection if Roe v. Wade falls.

This has sadly been an opportunity to mischaracterize and even lie about what women who are 24 or more weeks pregnant go through when they need an abortion and I find this deeply offensive.

When some doctor who does not do abortions and who speaks on “Biblical Masculinity” said — incorrectly — that a third trimester abortion was never needed medically I threw up a twitter thread in hopes that would help people combat the lies. I’ve been very busy working on my book and another very cool project (hence the lack of recent posts).

The thread went viral. Even God liked it! Thanks Big Fella. 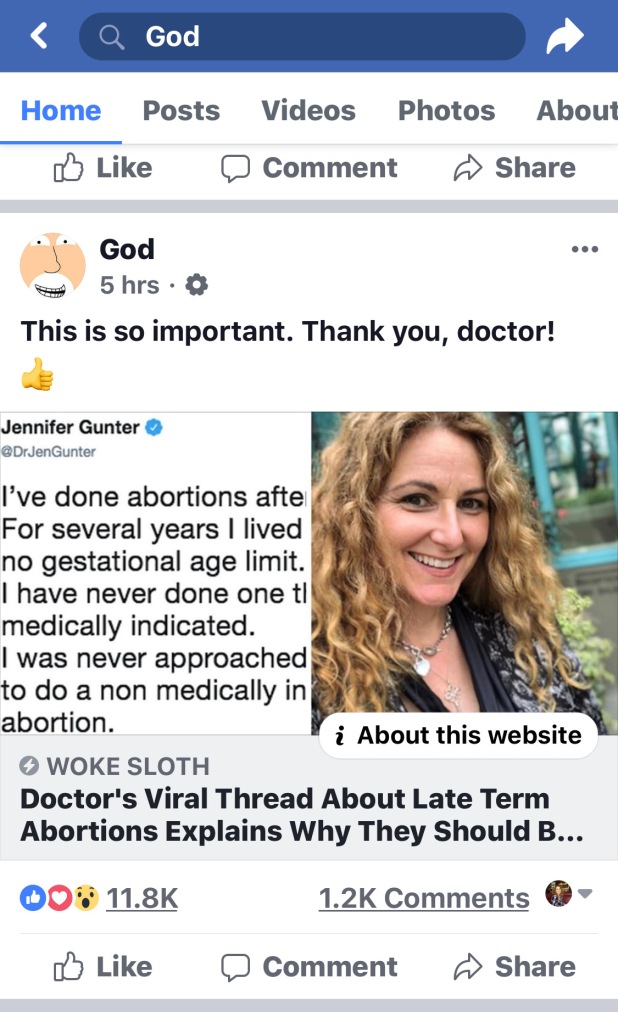 I understand more lies and vitriol are coming, so I feel the need to expand on the twitter thread. Facts matter, and lies about women and their bodies are a key weapon of the patriarchy. These lies also dishonor the women who have made difficult decisions about ending pregnancies at or after 24 weeks.

So, I’m going to walk everyone through this for what I hope (but don’t really believe) will be the last time. I have written about 3rd trimester abortion so much that I am stunned at the basic inability to grasp what is happening. However, medicine is hard so perhaps it is a good lesson in leaving medicine to those who can do it. How many people opining on abortion also opine on how their pilot should be flying planes?

Here are the facts about abortion at or after 24 weeks and the facts and I don’t care if you believe in them or not. They are still true.

What is an abortion?

Apparently some doctors don’t really grasp this, so here we are.

An abortion is the termination of a pregnancy. In the late 2nd and 3rd trimester it can be accomplished by:

There is a false belief that induction of labor early for a lethal anomaly is not an abortion. It is.

Here are my credentials:

For 3-4 of the 6 years that I practiced in Kansas there was no gestational age limit. I could let you put two and two together, but as there is so much abortion misinformation I’m going to spell it out. That means I could have done an abortion at any gestational age — even right up to the due date.

No one ever called me to terminated a healthy pregnancy or even a pregnancy with minor abnormalities. First of all, with no indication insurance won’t pay so it is $20k cash.

Also, WTF people? Do some of you really think women wander aimlessly through pregnancy wondering what they have forgotten and then at 37 weeks finally figure out why their pants are so tight and say, “Oh, THAT’S what I forgot to do 29 weeks ago. Pregnancy brain, Duh!” Then grab $20k from their mad money jar and head off the local abort-and-go?

The only case I know of was a 12 year-old girl raped by her brother. She had to travel from another state and I believe she was about 32 weeks (I did not do her procedure). It was done that late because it took that long to get the court order. If the legal system were actually protecting her she could have had the procedure at 8 or 9 weeks. If her parents were actually protecting her should would not havebeen raped. If this is the case that is going to put you up in arms then you are a terrible person. No 12 year-old girl should be forced to give birth to her 17 year-old brother’s baby.

Why are you harping on about 24 weeks?

Viability is largely accepted at 24 weeks, but sometime at 23 weeks it looks like there might be a 10% chance of survival. Sometimes at 25 weeks there is no chance of survival. That is why you go to OB/GYN or pediatrics school, to learn when a fetus has a chance after birth (and what painful interventions that chance might take). And you also learn (or should learn) to discuss it in a way that your own personal beliefs STAY THE HELL AWAY.

In general, we will offer a c-section at 24 weeks, but if look promising at 23 weeks and 2 days and based on the patient’s wishes we may offer one that early. There are times at 25 or even 26 weeks where we recommend against a c-section and an abortion is offered.

How many women have abortions after 24 weeks?

Only 1.3% of the 638,169 abortions that happen each year in the United States occur at or after 21 weeks — so approximately 8,000. As I am an expert I can tell you most of these procedures happen before 24 weeks. Most are for fetal anomalies (birth defects) and maternal health, but a few are maternal request.

A couple of years ago I took a deep dive into how any abortions at or after 24 weeks occur. I looked at the states that had no gestational age limit and the best estimate I have (this data is not tracked by the CDC) is there are about 1,100-1,200 abortions at 24 weeks onwards in the United States. Maybe the New York law will add a few to this number? Although they will likely not be additional, my guess is it will be women who now do not have to travel to New Jersey.

Women just don’t skip down to their doctor for 35 week pleasure abortions.

Why can’t they just have a c-section?

First of all, a c-section for an early delivery of a non-viable fetus is still an abortion. #TheMoreYouKnow.

That people don’t grasp this is shocking. And why these discussions are best left to experts who don’t impose their own religion on patients.

A c-section has a higher complication rate than an indiction of labor, D & E or D & X. The complication rate is about 10%. If a pregnant person is very ill those risks are higher. A woman is more likely to die from a c-section than any abortion performed by a trained provider.

MANY of the complications that lead to abortion decisions around 24 weeks involve issues with bleeding or other severe maternal health problems. These women are even more likely to have complications from a c-section — meaning they could die or lose their uterus or win an extended stay in an intensive care unit — than they would with an abortion by a trained provider.

A c-section on a very small fetus can wreck the uterus meaning a woman may not be able to get pregnant again or if she does she will be required to have a c-section earlier in the pregnancy, around 36 weeks. It could also lead to a catastrophic complication in a subsequent pregnancy called uterine rupture — the uterus rips apart on its own often leading to fetal demise and a hysterectomy if the woman is lucky.

This is why we don’t use c-sections for abortion, even though technically you canb terminate a pregnancy this way.

An abortion is typically NOT FASTER than a c-section, it is simply sometimes the better option. That is why it is offered.

Who has abortions at 24 weeks and beyond?

Women who are very ill around 24 weeks where the fetus is not expected to survive and delivery is needed and avoiding a c-section (see above) is preferable. It may also be when there are fetal anomalies and a vaginal delivery is not possible, or, when it is.

High blood pressure in pregnancy can lead to severe maternal and fetal health issues. It can require a very premature delivery to save the life of the mother. A good example is a woman at 26 weeks who needs to be delivered for her blood pressure — that is the cure, delivery. However, because of her high-blood pressure fetal development has been affected and her fetus is estimated to weigh 300 g, which means it can not live after dellivery. She will be offered an abortion if there is a skilled provider. This is safer for her and her uterus than a delivery.

A lethal birth defect at 32 weeks. The plan is to let the fetus succumb after delivery. The pregnancy has anencephaly or any one of a thousand other catastrophic chromosomal or cellular collisions that can conspire against you in pregnancy. The pregnant person thought they could make it to their due date, but they just can’t take it anymore. Or maybe their blood pressure is sneaking up and the idea of risking their life for a non viable pregnancy is not what they want or their doctors recommend. They choose an induction of labor, which in this situation is an abortion because the pregnancy is being terminated.

Triploidy or mirror syndrome or a massive cystic hygroma or any other birth defect that can affect how the fetus is positioned and how it molds and bends to deliver vaginally. If you don’t know what these terms mean, then you are not qualified to discuss abortion at or after 24 weeks, so stop. Now.

In these situations (tripoidy, mirror syndrome etc.) the fetus can be laying lengthwise (not head or buttocks down) so labor is not an option. A c-section is needed for delivery. Maybe there are also health reasons a c-section is less than ideal. Maybe the pregnant person just doesn’t want a c-section for a non-viable pregnancy. If a person who is skilled to a D & X is available, the c-section can be avoided.

There are, of course, other cases. I tweeted about the above scenarios, but realized everyone who wasn’t a well-trained OB/GYN wouldn’t understand. So, now you know why we “just can’t do a c-section” in these cases — or if we did why a c-section would STILL BE AN ABORTION.

The New York law does not allow women to have 35 week I’m-so-bored abortions. It allows doctors to offer a full scope of appropriate health care. In also protects women in New York if Roe v. Wade falls. It will, in all likelihood, result in a few more medically indicated abortions. I bet less than 10 a year. Almost all will be at 24-26 weeks and for a combination of poor fetal prognosis and maternal health reasons.

Abortion is sometimes needed at or after 24 weeks. Sometimes a c-section is even an abortion. If you say otherwise you are ignorant, meaning unaware or unable to understand the medicine (if you are a doctor that makes you ill-trained), or a liar.

Since writing the thread on twitter many women who have had abortions at or after 24 weeks have contacted me and thanked me for speaking their truth. I have received some beautiful notes.

How could I not speak up for you? I had women call me from states with gestational age limits with horrific fetal anomalies asking if I could help them? Would I help them?

Imagine being so desperate you would put your trust in an unknown doctor because a whisper network told you about them?

For them and for the women who will come after them.