I will freely admit that professionally I am no penis expert, however, I know medical bullshit when I read it and that is why I am focusing on this let’s-turn-a-press-release-into-an article story from Newsweek.

It caught my eye when this tweet scrolled through my feed. 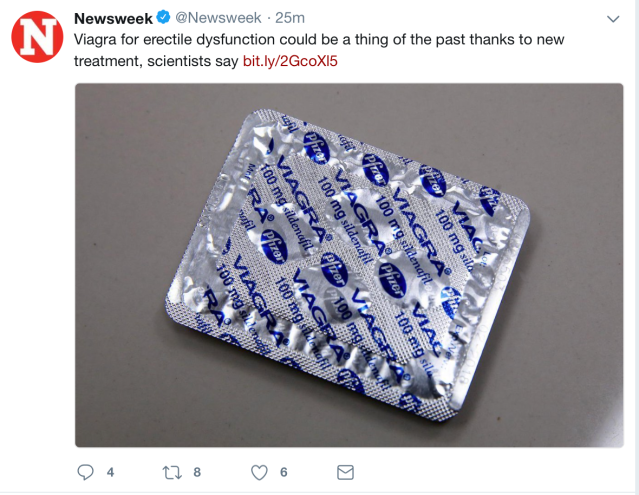 Pretty bold claim for a headline, so I assumed there must be some amazing robust new study to support this claim!!!!

Nope. This is all based on an unpublished data set of 8 patients.

But it is super cool and so worthy of international media attention because A) stem cells and B) stems cells injected into the penis and C) IT MADE THE PENIS LARGER.

That’s the scientific equivalent of a hat trick.

First of all, the “study” is likely not a study in the way the general public will assume. Eight patients trying a new therapy is a case series and very likely a phase II study.

Secondly, the data has not even been presented at a meeting never mind been published in a peer-reviewed journal. This is the science equivalent of a rumor. It may be turn out to be true, it may be partially true, it may be a leap of faith. We won’t know until we actually get to see the study design and the results.

There is apparently another data set of 12 patients from a separate study, but no results were given. As this is all unpublished I can’t verify anything. I also can’t verify the bigger penis claim. Apparently, in some newsrooms a press release is enough scientific verification.

The work was done at the Center for Regenerative Medicine in Sweden. They have one publication injecting penises with stem cells for erectile dysfunction, a phase I study that is in press. Phase I basically means the first test of an idea. These studies are small and are a proof of concept to decide if further work in the area is justified. The phase I study showed that 8 of 17 men with erectile dysfunction resulting from prostate cancer surgery recovered erectile function after injections, or slightly less than 50%.

What is interesting about this phase I published study, not the one reported by Newsweek…although who knows, maybe it is a long-term follow up of those 8 men? The reporter didn’t ask. WHO KNOWS IS NOT GOOD FOR MEDICINE OR REPORTING…

What is interesting about this phase I published study…is that men with incontinence had no benefit from the injections. Clinically this makes sense as they are likely to have more profound nerve damage. For the men who did respond improvement was first noted at 3 months and was even greater at 6 months. Of the 11 continent men who had an injection, 8 or 73% showed improvement. The authors did mention that historically in their medical center spontaneous recovery of erectile function was seen in 40 out of 135 men or 30%. So the phase I data for men who had surgery for prostate cancer and who now have erectile dysfunction and are continent is clearly worthy of further study.

Back to this latest unpublished data set of 8 patients that Newsweek and I am guessing a variety of other publications, like The Sunday Times, are turning into headlines. This not data that anyone uses for anything else but designing more studies. That’s it. It is unethical to report on it. I get that the news is event driven, BUT THIS IS NOT AN EVENT. It’s data for more research. It could be very good data. The phase I trial seems solid, but it is unethical in. my opinion to make sweeping generalizations until we actually have the facts in front of us.

The ethics of reporting on an unpublished 8 patient data set aside, the article does not even make it clear that the stem cell injection does not apply to other causes of erectile dysfunction. In fact it says, “the jab could give hope to the millions of men around the world who struggle with ED. According to the Department of Health, ED is very common and affects around 30 million men in U.S. Age as well as certain medical conditions, medications, psychological and emotional issues can make a man more susceptible to ED.”

Sigh. The real damage here is men with erectile dysfunction, regardless of the cause, might assume this is a real clinical trial in the way the general public thinks of a study and that it applies to all forms of erectile dysfunction. Some man will wait for the good data to make decisions, but the number of stem cells clinics are rising and it is easy to see how men could be lured into trying injections, especally with the promise of a larger penis!

No one should be reporting on stem cell injections for anything until they have been tested in a double blinded fashion with placebo injections. It is entirely possible that the act of injection could trigger an inflammatory response that might improve erectile function.

Stem cell clinics will use this news hype as advertising. At some point it could become a challenge to secure funding to do the study appropriately or to recruit participants. Who would want a placebo injection? We have interventions that clearly do very little and yet we can’t stop doctors from offering them because of the “demand.” What if further studies prove the therapy is ineffective? Do you think that will stop stem cells clinics from hyping them and men from getting them, because I don’t.

The tragic thing about demand is that it often drives bad or more expensive care or both. The best example in gynecology is the robot. No study says it is beneficial, yet almost every medical center offers it. You pretty much have to because patients demand it and of course that drives up cost and premiums.

Might stem cells help erectile dysfunction that is the result of prostate cancer surgery? The phase I published data suggests it is a valid hypothesis and that exploring this, especially for men who are continent, seems worthwhile. Until there is actual published data comparing this injection to a placebo injection reporting on it should be cautious if at all.

This article is nothing but hype with the potential to derail the science and give false hope to men with erectile dysfunction, potentially sending them to get untested injections.

And it pisses me off. No pun intended.