There is a new study on “abortion pill reversal” and it is bullshit.

It’s a terrible study, but as it advances a forced-birth agenda we can expect forced-birth politicians to salivate and cackle and use it to brew more laws that amount to experimenting on women.

I was made aware of the study because it was reported by MedPage.

Why a medical site would report on such a low quality piece of drivel is unknown, unless they have a secret anti-abortion agenda or they are using the plight of women to troll for page clicks? Anyway, MedPage made sure the quotes from the horrible people at The American Association of Pro-Life Obstetricians & Gynecologists, who make it their business to spread lies about abortion and to report women with miscarriages for suspected murder, were up front and the quote from ACOG, whose business is to spread facts about abortion, is buried at the end. Hey, everyone reads to the end of an article, right?

The “study” was published in that anti-abortion shit aggregator called Issues in Law and Medicine. I’ve written about this “journal” previously. This is basically a hate journal that exists solely to publish shitty studies to advance extreme-right conservative agendas. Here are their winners from Spring 2018.

Or these treats. Note how they publish the American College of Pediatricians who are essentially a hate group of pediatricians? 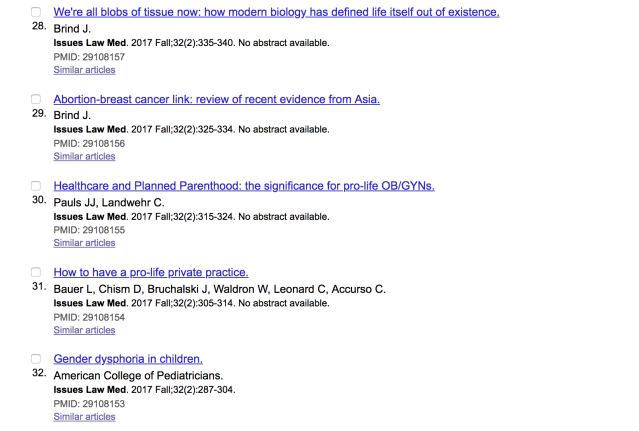 Sadly, Issues in Law & Medicine is indexed in the National Library of Medicine, which imparts an air of respectability. I don’t think hate journals should get that privilege, but hey, that’s me. I’m not saying don’t publish your drivel, but a journal that exists to push  anti-science agendas (they love the anti vaccine screed too) by publishing bogus studies is not a journal, it is propaganda. The obvious bias should lead to exclusion.

It’s called A Case Series Detailing the Successful Reversal of the Effects of Mifepristone Using Progesterone and claims a 64% success rate at reversing the medical abortion regimen when given after the first part of the regimen, the oral medication mifepristone. That sounds promising, until of course you actually read the study.

The authors used data from women from the United States and “several other countries” who called an “informational hotline” about abortion reversal. We are not told which countries.

After hearing some kind of information (not detailed in the paper) but I am sure was totally fact based (inside sarcasm emoji) the women who chose to proceed were referred to “physicians and mid-level practitioners” for treatment. The women apparently gave “written informed consent for treatment to their respective treating medical professionals that included permission to track their data,” but the study also had an IRB “waiver” from the University of San Diego.

I am struggling to make sense of this.

An IRB waiver also generally means there is minimal risk, but this is an experimental drug regimen on a vulnerable popluation (pregnant women and fetuses are considered a vulnerable research population). And an IRB waiver for a study with 325 providers from multiple countries? That is just not something that is done.

I have communicated with three different people who sit on Institutional Review Boards. All three found this sketchy.

I am struggling to understand how a observational study of a highly experimental regimen on a vulnerable popluation from  multiple countries that collects sensitive personal information could be elgible for an IRB waiver. If they were getting consent to give the medication why not get consent to be in the study? Except, of course, study consents would have to be reviewed and any inflammatory anti-abortion information would not be allowed.

If you were doing abortion reversal out of the goodness of your pro-life heart you wouldn’t be documenting all this data so well. Do the authors really expect us to believe that 325 different providers somehow all decided to tract data just cuz? Honestly, this reads like a non randomized clinical trial that used some smoke and miorrors to get around consent. At the very least it is a data base on a vulnerable population in multiple countries at multiple centers with highly sensitive information that somehow didn’t require formal IRB consent.

There were a significant number of women lost of follow-up (27%) including 57 women who changed their minds and once again took mifepristone.

There is no basic demographic data beyond gestational age, mode of delivery of progesterone, amount of progesterone administered, “birth defects” and gestational age at delivery. We don’t know maternal age, race, country, pregnancy history, smoking history, body mass index, or really anything about these women, meaning we can’t actually draw any conclusions.

The data, such as it is, is no shocker. When just oral mifepristone is administered and there is no misoprostol given the mifepristone fails 25-50% of the time, which is what the “study” shows. The failure rate at 5-7 weeks is well within what is expected if you do absolutely nothing after giving oral mifepristone.

Hard to comment on the rates at 8 and 9 weeks given the ethics issues, the drop out rates, the lack of basic demograhic data, and the fact that mifepristone alone is more successful earlier on the in the pregnancy.

Mifepristone alone fails 25-50% of the time. This paper adds nothing to what we know and offers no proof that progesterone does anything. While the idea is not bioloigically unsound, testing it outside of an IRB approved protocol without informed consent is unethical.

If a patient starts a medical abortion and changes her mind before she takes her misoprostol the recommendation is still to simply do nothing and to watch and wait.