H.R. 36 the supposed “20 weeks ban” based on ignoring the scientific literature about fetal pain does not ban abortion at 20 weeks it bans abortion at 22 weeks.

Why has no one made a big deal about this? It’s pretty important.

Here is the relevant passage from the bill: 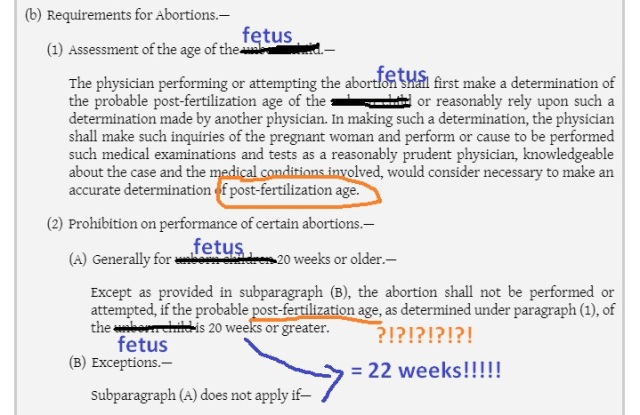 Medicine does not use fertilization age. This is fact. We use gestational age which is based on the first date of the last menstrual period (LMP). This convention is so ingrained that it is built into the programs on ultrasounds to date pregnancies when the LMP is unknown and even with IVF pregnancies when  you know the exact date. A made up term like post-fertilization age has no place in medicine. So why would Rep. Trent Franks use such gibberish?

The confusion is purposeful to dissuade patients

If you wanted women to be confused you would use confusing language. Say this bill passes, and it is a possibility, if you hear that abortion is illegal at the GOP”s fake “20 weeks” and you are medically (so using real science terms) 19 weeks you will think it is too late. This will especially be the case of you have an anti-choice provider who may not correct you. However, in reality the ban is at 22 weeks so at 19 real science weeks you do have time.

The confusion is purposeful to scare doctors

Doctors are practicing medicine and they may not check on the bill language, after all the press hasn’t been super up on it, or they may know this is really 22 weeks but they are scared because they have been threatened with jail time for practicing medicine according to the standard of care. Criminal charges are not covered by malpractice insurance and even if your defense is successful it will cost time, money and stress. All it takes is one zealous District Attorney looking to make a name in the party.

Establish fake fertilization age as the standard for “personhood”

The goal of the radical right and misogynistic science haters everywhere, like Rep. Trent Franks, is to make abortion illegal by declaring a fertilized egg a person. Getting post fertilization age into a federal law would be a major step in that direction as it would have permanently changed the goal posts by corrupting scientific terminology to a religious end.

The bill is filled with trash and gibberish and is not based in science. The “fetal pain at 22 weeks” side has provided not one shred of evidence that supports their position. If the people who advised him are unintelligent enough to understand the science of fetal pain perhaps they similarly ill-advised him on gestational age.

Rep. Trent Franks is not intelligent enough to understand the science

Perhaps Re. Franks was given the right information but just couldn’t comprehend it. When someone gets something so obvious to every first year biology student (and many high school students) so blindingly wrong one does have to wonder if perhaps they just didn’t have the ability to understand the science.

Rep. Trent Franks doesn’t care, doesn’t care to know, or is willfully and malevolently twisting words to achieve an end. I hope several reporters ask him why so we can all understand. So please everyone, especially the media, be accurate because that seems to be an issue for Rep. Franks. Call HR 36 what it is, a 22 week abortion ban. This doesn’t require a degree in neuroanatomy or a medical degree to understand this is basic biology 101 and Franks and everyone else supporting this bill needs to be called on it.

Legislation should not be based on lies or mistakes and we deserve to know which it is.