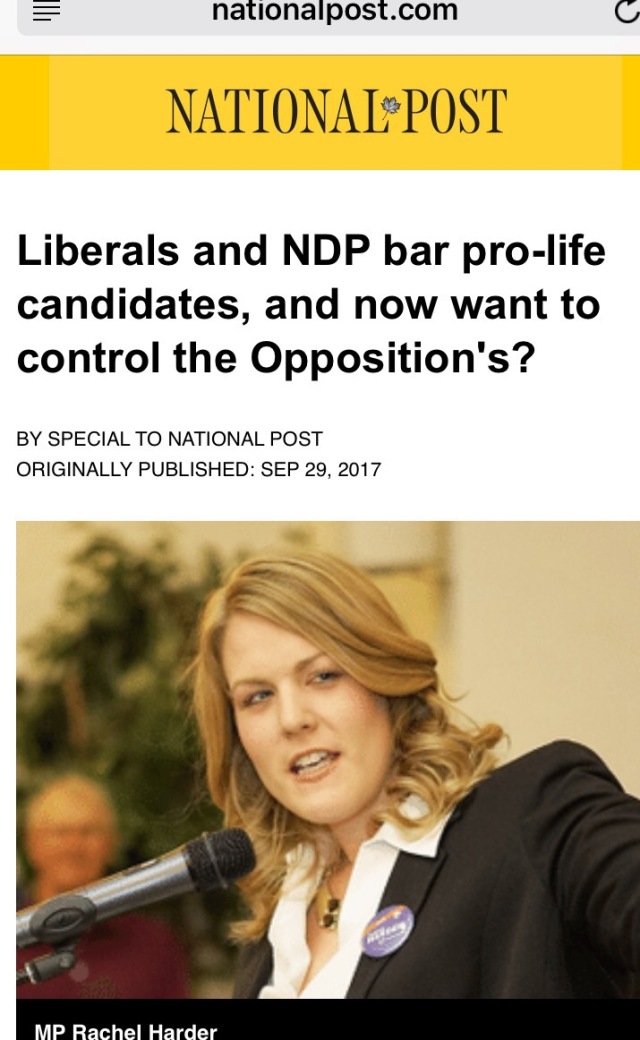 Rachael Harder, a Member of Parliament (MP) in Canada with a near perfect record voting against choice and abortion rights, was named as chair of the Committee on the Status of Women. The Liberal and NDP MPs on that committee left in protest. This action and the fact that the Liberal and NDP parties have a pro-choice platform drew ire from an op ed in the National Post by Kristine Kruszelnicki, a self-described atheist and humanist. The defense of Ms. Harder begins with the statement that the Liberals and NDPs support abortion through “all nine months of pregnancy” and asserts that most people are opposed to that medical practice.

Well yes, when people are lied to by politicians, given misinformation by the media and words are twisted online I suppose some people may very well draw incorrect conclusions. Fortunately here I am to set the record straight starting with pro-tip #1, don’t trot out the “all nine months of pregnancy” if you style yourself as a feminist or humanist because it is a clear dog whistle that you are not.

While my response is directed primarily at the situation in Canada this post applies equally, and perhaps even more urgently given the proposed 20 week ban in the United States, so I urge everyone to read on. After all the “ninth month abortion myth” was used to great effect in the U.S. Presidential election.

A feminist position can be one that does not support abortion personally but advocates for other women to make their own reproductive choices. It is your body, says the feminist, and that is different from my body. A faux-feminist adds a scarlet asterisk for abortion. A feminist also educates herself adequately on the reasons women have third trimester abortions so she can speak of them factually as lies harm women and a feminist does not wish to harm women. I hope humanists don’t want women harmed either.

The “ninth month” abortion argument is ridiculous medically but nevertheless an effective strategy played by those who have only read anti-choice propaganda or who couldn’t be bothered to do a simple Google search or who actually know that information but purposely ignore it to advance an agenda. It is a rallying cry meant to insert the thin edge of the wedge of doubt for those who identify as pro choice but otherwise don’t think about it too much. Trotting out “all nine months” regarding abortion is meant to insinuate that women show up at a hospital, gravid as can be, and some walk through the delivery room and others skip along to the abortion room for a good womb ripping.

To believe in the “ninth month” abortion promoted by the anti-choice brigade means you think nothing of women or their medical needs. It means you believe that either women end their pregnancies on whims or are so gullible that they are easily coaxed into ending their pregnancies by evil doctors or abortion witches who stand on street corners like Foulfellow and Giddeon offering a world of fun at Pleasure Island. Come closer my pretty.

How can it be feminism to sow the seeds of doubt that gestate into the image of a careless, wanton woman twisting her gum and deciding at 38 weeks that her pregnancy is just ridiculous and so off she heads to the local abortion shoppe because they are having a by-one-get-one special and she and her Insta gal pal, who is 37 weeks, have nothing better to do?

How many third trimester terminations happen in Canada you ask? Must be thousands upon thousands if you need to throw the term around so much in an op ed in a national newspaper? Turns out just under 600 abortions are done at or after 20 weeks in Canada (viability is largely accepted as 24 weeks). This is 0.59% of abortions. I know this because of statistics Canada, because I am an OB/GYN and because I don’t believe in making shit up.

Let’s say the lay “ninth month” is 36-42 weeks gestation. There will be a few of the approximately 600 post 20 week abortions in Canada that happen at or after 24 weeks, perhaps 10% but honestly 60 is probably being generous. Sixty a year (maybe) in a country of 33 million people, a fact glaringly absent from the National Post.

Abortions at or after 24 weeks are either surgical procedures, what the public thinks of as an abortion, or an induction of labor with medications. In Canada these only happen in hospitals. Women do not choose these procedures frivolously but rather for one of three reasons:

Fetal anomalies not detected until after 23 weeks. Most often the data is gathered and a decision made by 24-25 weeks at the latest but rarely it simply isn’t clear things are catastrophically wrong until 30-32 weeks. These are wanted pregnancies and so it can sometimes take weeks while women agonize over their decision.
A concealed pregnancy, perhaps a frightened teen or a rape survivor, that isn’t disclosed until later. Concealed pregnancies are much less of a problem in Canada with universal health care. I can think of one case around 24 weeks in five years of residency, so pre-Internet, where it took a woman that long to arrange care because her anti-choice doctor had lied and told her abortion was illegal.
Maternal health, meaning a woman is very sick at 23-24 weeks and the health risk of a c-section or waiting the three days or so to induce labor is considered medically unacceptable. These are wanted pregnancies but maternal health takes priority. Once a pregnancy is at 25 weeks a c-section and would almost always be performed with neonatal care except in the most unusual of medical situations.

None of these scenarios I have presented are anywhere near the “ninth month” battle cry of the faux feminist. Occasionally, so rare that perhaps there are 1 or 2 a year in the United States and so 1 or 2 every 10 years in Canada, a woman carrying a pregnancy with serious birth defects reaches 36 weeks and it becomes clear that she will need a c-section, perhaps the fetus is in a transverse lie (horizontal so not head up or head down), which is not compatible with labor. However, she doesn’t want a c-section perhaps for health reasons or maybe she just doesn’t want a c-section for this indication as no resuscitation efforts are planned. So she asks if there is perhaps another way? Or maybe she has a pregnancy with these fetal anomalies and is now very ill and doesn’t want a c-section and is too ill for a prolonged labor. This other way would be an abortion.

To casually and inaccurately throw around the term “all nine months” in a defense of an anti-choice politician who was meant to Chair a Committee on the Status of Women is a joke and not a funny one for those of us who care for women, with the emphasis on care. Feminists use facts to advance women’s rights and they also demand respect for the very few women who have to walk that difficult path of abortion after 24 weeks. Feminists don’t abuse the stories of women who through a damned awful permutation and combination of maternal and fetal indications find themselves in a very challenging position now desperately trying to make the decision that best suits their body and mind.

As soon as you say abortion in “all nine months” you have outed yourself as someone who wishes to provide false information to advance your personal agenda on women and that defines you as a misogynist. When you vote consistently along a hardline anti-abortion agenda that you dress up as “pro life” you are supporting a misogynistic agenda. It is sad that someone needs to point out to the National Post that a misogynist can simply not be the Chair of a Committee on The Status of Women.