Gwyneth Paltrow threw down the gauntlet. Having people ask about the validity of second-hand medical information from a ghost, wanting explanations about the antiparasitic properties of goat milk, or questioning the physics of recharging a jade egg with lunar energy is apparently more tiresome than adrenal fatigue. Too much entropy!  To remind herself that chicks like me are just brimming with negative womb energy she is apparently going to get her signature catchphrase, “If you want to fuck with me, bring your A game,” printed on cocktail napkins. It will not be ironic at all to sip a cocktail while the organic papyrus napkins gently cradle the goat milk petit four as she lectures about hidden carcinogens

I have taken this A game thing seriously as her pseudoscience and chicanery are lowering the medical I.Q., are harmful, and causing people to spent money on pointless “therapies.” Perhaps the woman who counts $1,134 statement-making sandals among her “must 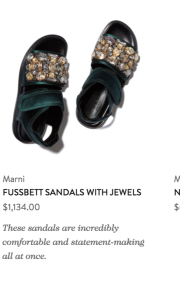 haves” doesn’t worry about wasting money, but I do. By the way the only statement these sandals make to me is ugly and expensive, but perhaps that’s why I don’t I blog about fashion.

After spending some time on her site last week I found myself looking at the “detox” turkey curry thinking maybe she isn’t all bunk. Yes the word detox grates, but it didn’t look awful. The curry is part of a 3 day “Anti Bloat Summer Reset” (I guess reset is the new code for cleanse or something). As someone with irritable bowel syndrome who has her bloating pretty well controlled I though, okay game on bitch. If she had better recipes than my home-made food (I even make my own bread) I would concede there was some good on GOOP. After all a few bloggers have chronicled their GOOP cooking forays and many raved about the taste and their enlightenment, although most also complained about the cost.

I’ve worked my way through the recipes and do watch this space for more on those, but I want to focus on the Morning Matcha Smoothie. This is breakfast for three days straight. There were two ingredients that were unfamiliar so before I blindly followed the links and ordered I wanted to know what was what, especially as I am very skeptical of foods for otherwise healthy people that require powders. If your food is nutritionally complete you shouldn’t need to boost it, you know?

I had to look up matcha powder and “Tocos.” Matcha is powdered green tea, which led me to wonder why not just use green tea and skip the coconut water? I mean if one wanted to make one’s enlightenment as accessible as possible one would do that, right? Then again expensive placebos are more likely to bring about transformation. Fortunately, I live in a very precious part of the country and one can buy matcha in bulk (no really) at a local store so I was able to buy just a very little. I then turned to the Tocos. What the fuck was this?

Fortunately for me and everyone else attracted by the promise of no bloating GOOP has a convenient link to their shop in the recipe. Tocos is raw bran rice solubles. Sounded fancy.

One can put 1-2 tsp of Tocos in the “potion” of your choice or “directly into the mouth.” I’m not shitting you. I guess eating is too low-class for GOOP?

Not one to take GOOP’s word for anything I decided to do some research. Rice bran solubles are the husk of brown rice that has been discarded when rice is polished to make white rice. So rice offal. Apparently it was once animal feed until some enterprising people in Big Transformative Foods figured out they could rebrand it and charge out the yoni. At first blush it does sounds healthy as brown rice has a better nutritional value than white. Apparently, it is very high in vitamin E which is tocopherol hence the catchy name tocos. Get it? Ha ha.

When you Google rice bran solubles you just get a bunch of manufacturer sites and Natural News so this intrigued me. Not even a Wikipedia page (hoping some of you can get on that). Bon Appétit had only great things to say about it in January (2017). It’s the non-dairy creamer your face will love! I did not create that word salad, honest. Rice bran solubles are the veritable fountain of youth reclaimed from the slop pile! The Rumpelstiltskin of food, turning rice husks into nutritional gold!

On the second page of the search, so Siberia for the crack editors at Bon Appétit, I found a couple of articles reporting that rice bran solubles have high arsenic levels based on a published study where the authors tested commercial brands as well as processing the rice themselves. Arsenic is a carcinogen and a poison, so that’s not transformative in a good way. This made sense as there is arsenic in rice and there is much more in brown rice. Rice bran solubles have 10-20 times the amount of arsenic as rice. Awesome. But hey, that’s on par with GOOP ignoring the science when it’s convenient for their brand and their brand partners. The audacity of calling arsenic laden “tocos” a nutritional powerhouse is incredible especially considering the amount of arsenic in rice bran solubles makes it illegal to sell in China. I guess GOOP also ignores Eastern medicine when it doesn’t fit their marketing so at least they are consistent.

This obviously posed a dilemma for me. The idea of buying this stuff offended me yet I wanted to try the drink. I wasn’t worried about one dose being an issue, but I wasn’t paying $20 for the privilege of mainlining a carcinogen. I settled on Bob’s Mill rice bran. I tasted some, sorry, I mean I put some directly on my tongue. It tastes exactly like what you expect powdered animal feed to taste like, the bottom of a farmer’s boot.

I made the smoothie. It was gross and I burped all morning. It filled me up although no more than my standard breakfast.

I found the information on “tocos” and arsenic with five minutes of research, i.e. not my A game. GOOP editors either knew and didn’t give a shit because “tocos” are trendy (i.e. they sell) and they were counting on no one checking or they actually never researched it. I am honestly not sure which is worse for a health and wellness site.

While a few doses of this arsenic smoothie a month are probably not going to harm an adult if you are a smoothie junky that could be different. I would not give this to children as they are at greater risk from arsenic in food. Lots of kids get smoothies on a regular basis so the use of “tocos” or rice bran regularly could be a concern. I soak my rice overnight and boil it in additional water to lower the arsenic content for my kids and myself so it would be ridiculous to undo this with an unnecessary smoothie ingredient. I threw out the rice bran. Arsenic is like cigarettes the best dose is none.

I think it’s fucking hypocritical to be all about “toxins” and cleanses and cancer fear and then promote and sell a product that is illegal in China because of its arsenic. I don’t know about you but I expect my summer reset smoothie to be arsenic free. It seems that GOOP devotes as much attention to nutritional science as they do to medicine and physics. Dear God if this is their A game I’d hate to see their B entry.

Maybe my cocktail napkins will read, “Gwyneth Paltrow’s game only rates an A on a homeopathic scale.”