I often read of recommendations for Ayurvedic medicine on sites espousing alternative medicine. According to the National Center for Complementary and Integrative Health Ayurvedic medicine originated in India over 3,000 years ago and involves the use of herbal compounds, special diets, and other health practices. I didn’t think too much about this practice as a distinct risk compared with other alternative therapies until I was doing some background checking on a woo-filled Gwyneth/GOOP post that involved the usually scammy mentioning of heavy metal poisoning. Unlike the Medical Medium I consult science instead of ghosts and so I stumbled upon a real cause of metal toxicity, Ayurvedic medicine. This was news to me and so I suspect it may be news to some of you and so I have been meaning to pass this information along. 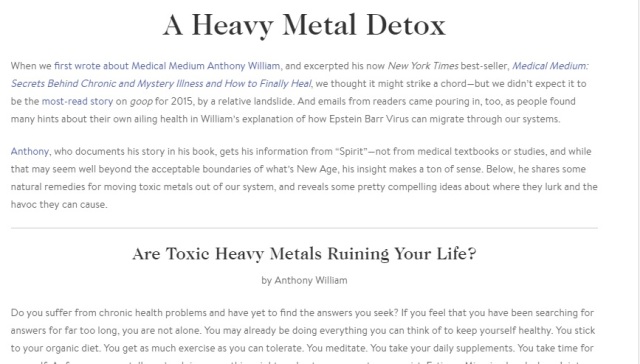 Many studies have identified unacceptable levels of lead, mercury, and/or arsenic in Ayurvedic medicines. In one study 21% of Ayurvedic products were contaminated with metals and another study found 82% of products tested exceeded the recommended values for lead and 62% the recommended levels of mercury! In the United States there have been reports of poisoning from Ayurvedic medicines in Iowa, New York (among pregnant women), and Wisconsin.

I am generally skeptical of supplements because there are no supporting studies and often they don’t even contain the advertised product or have unlabelled fillers (or are entirely filler). Substitution is well-know and while these unlabeled ingredients have the potential for harm it is generally not to the same degree as lead, mercury, or arsenic!

Many people who take supplements are unaware what they are taking. When I ask about specifics it is not uncommon to hear, “Some herbs recommended by my naturopath or herbalist.” Very few people it seems actually know what their supplement is supposed to be never mind what it actually contains. It is definitely possible they could be taking Ayurvedic medicines which may pose a serious health risk.

Many patients, courtesy of hacks like Paltrow and the “Medical Medium,” wonder if they have heavy metal poisoning and in the most tragic irony of all if they take some alternative medicines the answer could actually be yes.