I have been a gynecologist for over 20 years. Including residency I have been performing pelvic exams for over 26 years. I have done thousands of routine well-woman pelvic exams and thousands of exams for women with symptoms. While my personal n of 1 is certainly not research I have not once picked up a health condition in a truly asymptomatic woman with a routine pelvic exam. A routine pelvic exam includes looking at the vulva, placing a speculum in the vagina to look at the cervix, and a bimanual exam (one gloved hand is placed vaginally with the other on the abdomen to assess the size and shape of the uterus and ovaries). Sometimes a rectovaginal exam (one finger in the rectum and one in the vagina) is also performed. I bring this up in light of the US Preventative Services Task Force findings that there is inadequate evidence to recommend screening pelvic examinations (vulva, speculum, and bimanual exam) for the early detection and treatment of a variety of gynecologic conditions in asymptomatic, nonpregnant adult women.

I have definitely seen women harmed, both directly and indirectly, from routine pelvic exams. Indirectly because the doctor thought they felt a mass and so an unnecessary and possibly painful and definitely expensive ultrasound was ordered (never mind the anxiety waiting for the results). I have also heard of doctors who diagnose asymptomatic vaginal wall or uterine prolapse during exams and then either the patient worries about it unnecessarily or worse, the doctor recommends surgery. Asymptomatic prolapse happens to almost all women as A) the vagina is built to stretch and B) gravity. Asymptomatic prolapse does not require anything and yet some of these women end up with expensive and definitely not needed surgeries that have not an insignificant risk of complications. I have also seen very many women scarred emotionally by a pelvic exam with real physical ramifications. A painful pelvic exam, besides being wrong and painful, can trigger pelvic floor muscle spasm and lead to pelvic pain and pain with sex. As an aside, if a pelvic exam is painful for an asymptomatic woman either the examiner is unskilled or uncaring or there is actually a medical condition that has simply not yet caused sufficient discomfort or irritation to trigger symptoms. It is almost always the former.

I have also seen women who believed they were asymptomatic when they were not. A woman who reported she was fine, but during pelvic exam she could not relax her buttocks on the table and so we stopped and an in depth discussion revealed she had pain with sex . I have also seen women who didn’t think they had a health issue, but I found redness on the vulva and that triggered me to ask one more time about incontinence. If a woman is not bothered by her incontinence and wouldn’t have surgery or take medications she may not mention it even when asked, but the redness makes me ask about skin care and pads and then I find out she is using menstrual pads instead of incontinence pads. There is a difference and the former will cause irritation where the latter will not. However, most if not all of these “gets” could be identified with a detailed history or at the time of the Pap and certainly do not need the added bimanual exam. I honestly can’t think of one time the bimanual exam has made a difference for a woman who clearly had no symptoms.

Every now and then the fact that you did a pelvic exam that wasn’t painful helps a woman trust you with other very intimate information. Sometimes she discloses a rape, or pain with sex, or the fact she no longer has orgasms, or that she has fecal incontinence. Many things we manage in OB/GYN are difficult or embarrassing and sometimes it takes physical proof that a woman can trust you before she discloses. I am not sure how this could be measured in studies or if it has ever even been measured, but I know it is true because it happens in my office. However, as the speculum exam is usually the hardest for most women a routine Pap may still offer this physical demonstration of trust.

Once or twice I have seen a woman at her routine exam and identified an advanced vulvar cancer. She actually had symptoms, but was ignoring them out of fear. She was finally pestered enough to come in for her Pap smear, but the look at her vulva before the Pap smear would have identified the cancer. Again, the bimanual exam would not have helped.

What is often missing from the discussion is that many women think they are asymptomatic (or want to believe they are asymptomatic) when they are not. Sometimes it is being medically naive and other times it is intentional. Fear or the cost of going to the doctor makes people justify a whole host of symptoms. We all want to believe what we want to believe. It is also important to mention that health literacy and comfort with sharing intimate details varies as does the skill of the person asking the questions. What I as a gynecologist with over 25 years experience know to be asymptomatic may not be translatable to the general public and yet a routine bimanual exam and speculum (outside of a Pap smear) offers nothing. So what are we to do?

We should be more accurate with the terminology and not use the global term pelvic exam. Using the term “routine pelvic exam” could be confusing as a Pap smear requires a speculum and is routine and involves the pelvis. Many women think a Pap smear is a pelvic exam and vice verse. I have seen women not come in for Pap smears for years and years because they thought it was done the three times they were seen in the emergency room for pelvic pain, but what they had was only the bimanual and so they missed out on 10 years of cervical screening. I propose using the term routine bimanual and speculum instead of pelvic exam. Yes it is more cumbersome, but it is also more accurate and that is what matters.

Women should be told that a routine bimanual and a speculum exam when there are truly no symptoms offers no cancer screening and that no study has shown it offers much of anything at all. Similarly women should know that a Pap smear screens for cervical cancer, requires a speculum, and is different from a bimanual exam. Women should also know how often they need a Pap smear (check this link from ACOG or the image below).

Doctors must be educated that the only way to detect ovarian cancer or uterine cancer with a bimanual exam would be with magic. Doctors should also only do the exam that is needed. For example, when I see woman with a yeast infection I don’t take the opportunity to check her uterus and ovaries with a bimanual if the symptoms do not warrant it.

Women do still need to check in with a reproductive health specialist, whether that is once a year or once every two or three years depends on a lot of factors. When women come to the gynecologist we do ask questions about birth control, domestic violence, multiple sex partners, and incontinence (just to name a tiny fraction of what we discuss). Some women will know they are asymptomatic, but others will incorrectly identify normal as abnormal and others will brush of abnormal as nothing to worry about. It is not uncommon to find out at annual exam that a woman discontinued her birth control four months before, is having unprotected intercourse, and does not want to be pregnant. Waiting 2 years and 4 months instead of 4 months to find this out is not ideal. An asymptomatic woman with normal Pap smears who is HPV negative who historically has had lots of issues with contraception might warrant a different follow-up than an asymptomatic woman on year five of her copper IUD. If a woman has a relationship with her GYN health provider and she develops symptoms she may bring them up sooner if she has someone with whom she has a medical relationship. For some women a Pap every three years will be build more than enough trust and for others an annual check in will be needed. A first encounter, be it for a Pap smear or vaginal discharge, should be followed by a discussion of how often regular follow-up is warranted. It may be very reasonable to touch base simply by phone between Pap smears.

ACOG’s Well-Woman Task Force (2013) concluded that the inclusion of speculum examination and bimanual examination for asymptomatic women should be a “shared, informed decision between patient and clinician,” but I think it would be pretty hard for some women to say no if the bimanual exam were offered especially if they were already undressed. I have a hard time telling my hairdresser I don’t want the expensive deep conditioner that they offer that really doesn’t seem to make a noticeable difference in my hair and I’m fully clothed and there is no specter of cancer. There is a huge power differential in the doctor’s office and many patients may be worried about not pleasing their doctor, feel pressured because of time, or think if it is up for discussion then it must have some value. This is America and in general the default for everyone, medical or not, seems to be over test.

To me the answer is being really clear about de linking Pap and STI testing from routine bimanual and speculum exams. We need to educate women and providers that a bimanual exam and speculum exam when there are no symptoms seems to offer nothing, while not forgetting that checking in about symptoms and some kind of regular discussion about reproductive health may be needed more often than every three years. Women over 65 who no longer need Pap smears may similarly benefit from check ins. Whether this needs to occur every one, two, or three years will depend on many factors.

The data doesn’t support a regular GYN check up with a bimanual and speculum exam for asymptomatic women, but an annual or biennial check in may very well be invaluable. 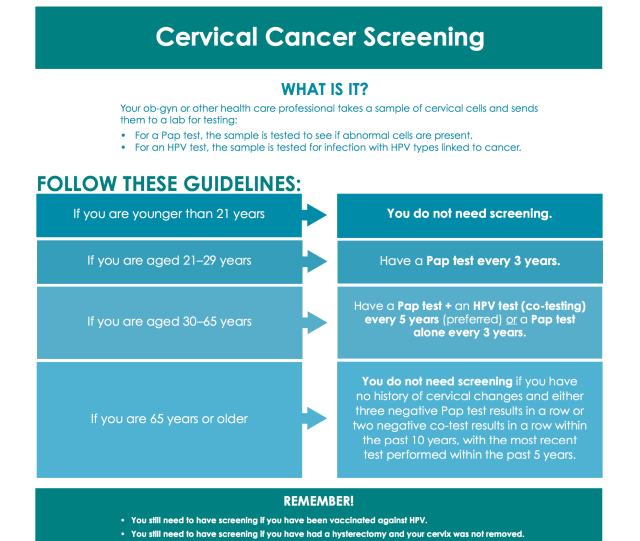