People who know nothing about abortion or women but who think it is their business to control women’s reproduction are angry about Teen Vogue’s slide show, What to Get a Friend Post-Abortion. 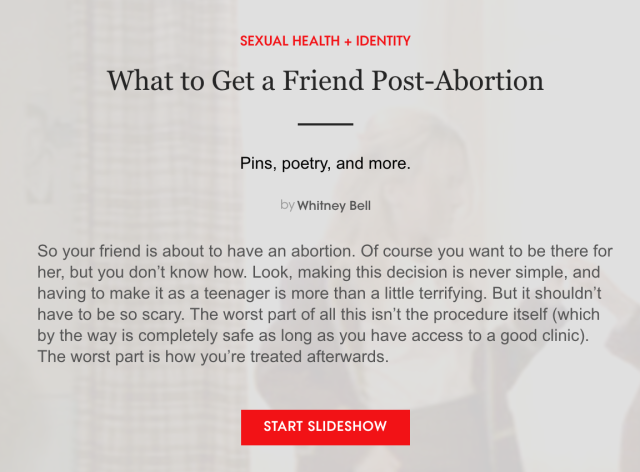 The piece was called vile and an attempt to normalize abortion (whatever that means, abortion is not normal or abnormal, it’s a procedure).

Some people think these “whimsical goodies” (which makes one think of something twee or ruffled and hideously ugly and nothing one would find in Teen Vogue) are what lead a good, young girl from her purity pledge down a path of sluttery to abortion.

Lifesite news was upset that the heating pad was an angry uterus. Should it have been an angry penis? Oh right, women should writhe in pain to do penance or something because suffering is Christian. Well, suffering for women anyway.

Bring some Thinx (that one is really great!. Women usually bleed for a few days after an abortion and we generally recommend against tampons. Pads are obviously an option, but Thinx are a really great alternative. Does Erick Erikson want women to just free bleed around the house or something?

A book of poetry by Rupi Kaur

A heating pad shaped like an angry uterus. It’s the uterus cramping, why shouldn’t the heating pad be shaped like a uterus? A heating pad can obviously be used again during your period or even when you have a sore back. This is so not whimsical. It’s weird and kind of Ugly Doll. It might get a friend to crack a smile. I guess that’s the wrong part?

A ball cap with a GRL PWR. Why not? You’ll know if it’s the kind of thing that might make your friend smile. Also, just because you’ve had an abortion doesn’t mean you don’t want to cover up your hair when you get out for a walk later that day.

An F U-terus pin. This idea is to wear it when some “rude jerk asks if you regret your choice (as if that is somehow their business), you won’t need to say a word.” The proceeds also go to Planned Parenthood. I think the people who are angry at this think smaller government means one so tiny it can fit in a uterus.

Sign up to be a clinic escort. I love this idea of paying it forward with activism. This probably scares the forced birthers.

We won’t go back needlepoint. Why not? Unless you think we should go back.

RBG coloring book. Adult coloring books can be soothing. Why not have one celebrating a Supreme Court Justice!

None of this screams abortion party BOGO to me. Three of the suggestions are medical (chocolate is always medicinal). Poetry, what’s wrong with that? A movie. Chocolate. I mean really.

If you think an angry uterus heating pad or period underwear or a coloring book celebrating a Supreme Court Justice glorifies abortion then you are seriously an idiot.

“I was going to keep the pregnancy, but instead I’m going to pay $800 and have an unnecessary transvaginal ultrasound and take two days off work because of the mandatory 48 hour waiting period just so I can get a cool pin and a heating pad from my bestie!” If that’s what you really think, you are an idiot.  Our laws make abortion punitive and there is nothing anyone can do after the fact to erase that shit.

If you think young girls ages 12 or 13 are going to think abortion is cool because of a needlepoint then you are an idiot.

I do, however, understand how the idea of helping a woman not feel ashamed might scare you if you hold misogynistic anti-science views. That speaking about abortion as a medical procedure, because that’s what it is, scares you. Better to have it lurking clandestinely in back alleys. Oppression and lies and fear are the weapons of the unjust.

When a magazine dares to speak about abortion just as it would an acne medication or sunscreen it is seen as radical and subversive to those who wage wars with lies, because in a few short slides Teen Vogue not only provided meaningful information about expected recovery, but they reframed what has become an isolating experience for many as just part of being a woman and also provided a call to arms.

This writing is anything but frivolous. It’s powerful.