The New York Times is reporting that Trump’s personal physician Dr. Bornstein has recently revealled that Trump is on the drug Propecia for hair loss.

If you are a regular reader of my blog this will be of no surprise to you. In August 2016 when I took Bornstein’s letter apart after it has been given but a cursory glance I made note of his surprisingly low PSA. In fact, I wrote an entire post about it where I reported the probable causes:

As no other information was reported I was left wondering why? Low testosterone can be age related or it could be from alcohol (unlikely as Trump is widely reported to abstain) or opioids. Who knows, no urine drug screen was provided?

I figured Trump’s ego was so fragile that the thought of people knowing he was taking something for hair loss or for prostate issues would drive him mad, hence the exclusion. His hair is perfect! His hands are large!

And now we have the answer, Trump is on Propecia.

As Dr. Oz the Great and Powerful never let us see the second letter submitted by Dr. Bornstein we don’t know if it was just the first letter that neglected to include a complete list of medications or if both of them did. Dr. Oz gave very little additional information, but he did so very authoritatively.

Dr. Bornstein also forgot to mention that his long-term patient was taking the antibiotic tetracycline for a skin condition. Did he admit this once or twice? Who knows? Why omit it? Who knows?

Propecia can have side effects, primarily issues with ejaculation or sexual function, but it can also lead to depression. Possibly an important side effect for anyone, but especially for the leader of the free world.

So here we are. Trump’s medical letter was a either woefully incomplete on purpose or because of carelessness, neither of which is especially reassuring.

I am just left to wonder what else is missing from Mr. Trump’s medical record and how thorough his health evaluations have truly been? For example, given Trump’s family history of Alzheimer’s disease and the fact that he was planning on being the oldest President perhaps he should have been screened for cognitive impairment? I for one don’t find his sentence structure, given his massive I.Q., or reported behavior on the phone with the Australian Prime Minister comforting, although he may really just be a boor whose grammar hovers around the 6th grade level (according to the Washington Post, I’m no grammar scholar so I needed back up).

What concerns me most about the absence of a cognitive screen is Trump, who claims he is brilliant, would have benefited greatly from a perfect score. He bragged constantly about his strength and stamina while campaigning, so I would have thought he’d have jumped at the chance to shine and boast about his perfect brain. 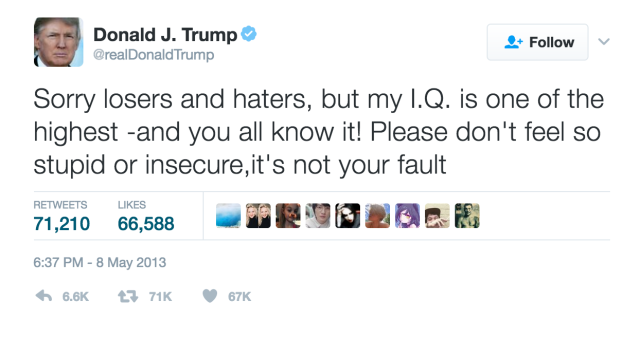 Did Trump’s doctor simply not think to do a cognitive screen in the same way he didn’t think to spell check his letter or include all of Trump’s medications or is there some other reason? Who knows? With incomplete records and slowly leaked information there are lots of who knows?

What did Dr. Bornstein fail to disclose the Propecia and tetracycline?

Who knows! Maybe we’ll find out in a series of new revealing interviews after the mid-terms.