Ohio is the latest state to attempt to pass a medically illiterate abortion “heartbeat” bill.

It’s bad enough that these bills exist, but the press needs to do a better job of calling them what they are. If politicians want to play doctor they should be using medical terms. If they refuse to use the correct terminology the press should correct them. People who vote for the assholes who write these shit shows know them as “heartbeat bills” not because they follow them as they groan through committee, but because that is how they read or hear about them in the news. The politicians know exactly what they are doing  as a “heartbeat” bills is a way of making a 4 mm thickening next to a yolk sac seem like it is almost ready to walk.

Fetal cardiac activity can be detected as early at six weeks from the last menstrual period. The ultrasound below shows an image at 6 weeks and 1 day. 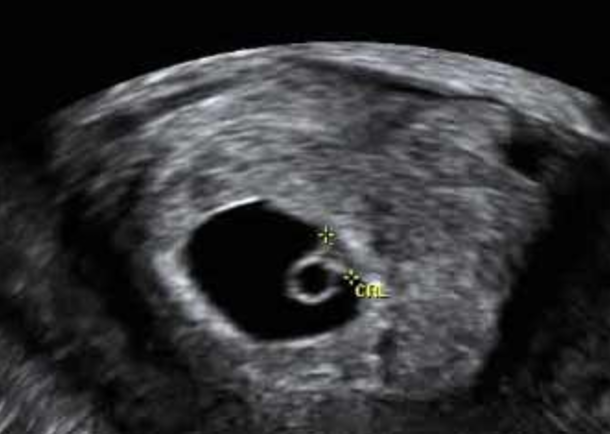 The fetal pole is between the two markers and is a thickening at the end of the yolk sac (the yolk sac is the circular blob) and contains the earliest ultrasound evidence of cardiac activity. I know some have wondered why not use the term embryo, but as it’s the fetal pole that is being measured I think the term “fetal” is technically fine.

However, when most people think of a heartbeat they don’t think of a 4.3 mm thickening next to a blob they think of something like this…

The image above is a anti-choice version of an embryo, obviously not a faithful representation of size or appearance. If you want a real picture for comparison check out this link.

I expect nothing less than a campaign of misinformation from the misogynistic degenerates who hold office in these places. I worked in Kansas for many years and after a restrictive law passed I found myself in a three-way phone call with the hospital attorney and the politician playing doctor who tacked on the abortion rider to the bill that turned the governance of Kansas University Medical Center (KUMC) to a private authority. Yes, that’s right the State legislature in Kansas held the hospital’s financial future hostage over abortion and the Dean and the University caved. The politician who added the abortion rider to the bill was simply shocked that an abortion could actually be needed for health reasons. I mean he was gobsmacked. He believed the lie hook, line, and sinker that pregnancy never maims or kills. He was also somewhat shocked that the hospital attorney had tracked him down at night and that he had to explain what he meant by “the life of the mother being in danger” to a doctor. Dear Reader, the hospital attorney was worried we would be sued if this non-doctor didn’t think the woman was sick enough so I had to call and explain modern OB/GYN to Chance the gardener.

After some silence and muttering he said something like, Oh my, just do your doctoring of course. I am sure that even before the receiver hit the cradle the drop of truth that I had forced him to drink was rapidly diluted by the poison he’d been supping since birth and that woman and every single one like her dropped like chaff from his narrow little mind.

No one passing these laws gives a shit about the medicine or the science or the statistics. Really, they don’t. If they did these laws wouldn’t exist and there would be laws providing free long-acting reversible contraception because that’s actually what works. I really believe the assholes in Ohio who voted for the fetal pole cardiac activity bill truly believe that the more than 21,000 women in Ohio who get abortions each year are just doing so because the greedy doctors who run the abortion spa at the mall have frequent BOGOs on pleasure abortions and if these little women just had a firmer hand from the patriarchy they would see the error of their ways. As pregnant women needing abortions won’t be picketing their offices they will take the silence as tactic approval, but who has time to picket and march when it’s tic toc. Women will be panicked making calls to find an out-of-state clinic and many will be raising money. Anyway, even if you do have the cash on hand do you want your face in the paper so your rapist can see you got pregnant? Maybe you don’t want your parents to know not because your are a teen, but because you are a grown ass woman and it’s no one else’s fucking business what you do with your body?

While the press doesn’t write bills or pass laws they do pass on information or in this case subtle misinformation. Using “heartbeat” anywhere in a piece, but especially in the headline, even in quotations is not appropriate. It’s no different from allowing a neo Nazi to self identify as alt-right.

The earliest cardiac activity is seen in a fetal pole and using any other term means that you are lock step with a campaign of misinformation and it’s wrong.

The politicians who write these bills are dealing in misinformation and the press should refuse to play the game.