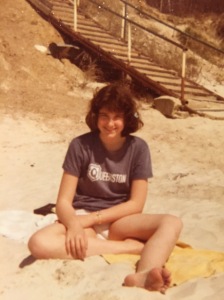 I remember the exact moment I became fat.

It was 1979 and I was 12 years old and standing in my mother’s bedroom in front of her mirror. The next day was 1950’s day at my junior high school and my mother said she had just the thing. She pulled a gorgeous dress out of her closet. A dress so breathtaking that even though she could not longer wear it she had not been able to part with it. A rose fantasy in chiffon and tulle nipped smartly at the waist. It was the kind of dress made for a 12-year-old girl’s dreams.

I struggled to get it on. Eventually I got it over my hips, but no amount of wishing could get the zipper more than half way up.

“Hmmm, my mother said. I guess you’re too fat.”

I felt my face flush. I desperately fumbled again with the zipper.

Then she added, “I wore that even after I had your brother. I was so thin.”

I slid the folds of coveted rose dreams off my shoulders but could not shed the shame. She handed me a plain blue gingham dress that looked like something Half Pint might wear if she were transported in time to Rydell High. It was tight, but it fit. It was not the stuff of dreams.

I walked into that room a very tall averaged sized girl in the seventh grade. I walked out a fat girl.

I recently found some old pictures from junior high and I was stunned at how average in size I was. Older looking perhaps, but just a regular sized tall girl and yet my memory tells me I was overweight most, if not all, of my life. An entire memory changed. That’s how much damage those words did. I am thankful to have these pictures. They are a place marker for the truth.

My mother’s words became a self-fulfilling prophecy. I started to feel self-conscious around food, so I dieted. My image of myself was so warped that no amount of weight loss could fix it. Eventually I’d gain the weight back, meaning get back to an average size which I interpreted as fat and so I’d start again. I spent years thinking I was overweight when I wasn’t, struggling to achieve what I already had but could not see. Eventually as the weight crept back so did a few extra pounds. And then a few more. And then more still.

I made dating and sex decisions based on this warped body image. I desperately wanted someone to tell me my body was beautiful, but even when they said it with the honesty of Prince Charming I couldn’t hear it. I looked for men who reinforced the terrible things I believed about myself.

I remember as if it were yesterday the video of Donald Trump publicly shaming 18-year-old Alicia Machado in 1996. I know that forced smile as she put on a brave face and I feel her devastation and humiliation that ran just beneath as if it were my own. My own horror happened in a bedroom, but that poor girl had to endure it in front of reporters who not only filmed the shame falsely forced upon her but who wrote about it. Over and over again. She went from objectively being the most beautiful young woman in the world to being the opposite.

We now know that fat shaming does nothing to help people who are overweight lose weight. Science tells us that being labeled “too fat” can cast the curse of a body image disorder upon girls and young women. Being labeled “too fat” between the ages of 10 and 19 years of age, regardless of body mass index (BMI) at the time, makes a young girl or woman more likely to be obese later in life. It is worth restating, calling a young girl fat when she is not is a risk factor for obesity.

Whether it is misplaced intentions, plain old cruelty, misogyny, or free publicity for a new business labeling people by weight is hurtful, wrong, and harmful. However, it is also true we did not know in the 1970’s or even the 1990’s how physically and emotionally damaging weight labeling could really be.

Donald Trump had two options when faced with how he treated Alicia Machado in 1996, one is presidential and the other cruel. One option was something like this:

You know I was nervous about my new business venture. I’d just bought the Miss Universe pageant and I’d invested a lot of money. I over compensated. It was the 1990’s and we didn’t know how harmful weight labeling could be. I really regret it and obviously I would like to take it back.

But he doubled down in cruelty. Immediately at the debate. In interviews. On Twitter.

He showed he is a man who truly believes the value of a women lies in some superficial attribute that he alone is fit to judge.

Did Clinton bait him? Of course.

Does it matter if the man wants to be the most powerful person in our country and possibly the world, a man whose words our young girls and women will hear, feels that fat shaming is fine and not cruel and damaging?

You bet it does.