Hillary Clinton left early from the 9/11 commemoration in New York as she felt “overheated.”  This video of her leaving the event shows Mrs. Clinton leaning against a concrete post and then her legs appear to buckle under her as she is helped into the car.

The video above shows what appears to be near syncope or an “amost faint.” Unless one was with Mrs. Clinton in the van one could not say if she fainted. As a doctor I see near syncope and syncope routinely as it happens during and after procedures. With near syncope it is pretty easy to intervene, as Mrs. Clinton’s team did, and prevent the faint.

Why do people faint or almost faint?

The lack of blood flow to the brain that triggers fainting can be caused be a wide variety of thing, from anxiety or eating a massive meal all the way to very serious heart problems.

Her’s a pretty definitive list from a nice review article: 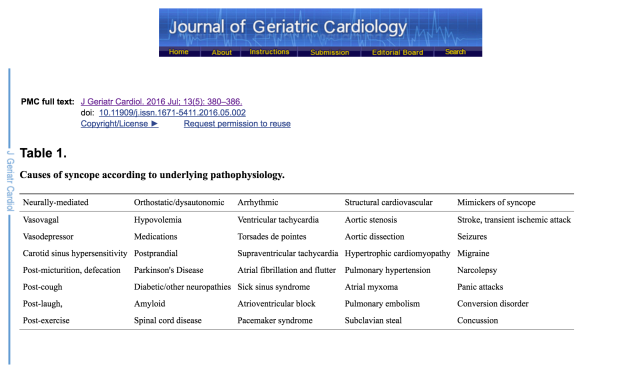 The CliffsNotes of the above is that fainting is either due to the nervous system, blood volume, or the heart. Neurally or nervous system-mediated syncope happens when the autonomic nervous system gets twitchy and messes up vascular tone or heart rate causing blood to pool in the legs. It’s a reflex gone awry. The nervous system has all kinds of reflexes to control heart rate and blood pressure that are constantly fine tuning the vascular system behind the scenes and sometimes the signals get messed up. This is the most common cause of fainting for someone of Clinton’s age.

Orthostatic hypotension is another common cause of syncope and it is basically the opposite of neurally-mediated syncope because it is a sign of sluggish or impaired autonomic reflexes. This can happen when there isn’t enough volume in the system (dehydration) or it can be due to medications or medications (diuretics, anti-hypertensive therapy), especially when superimposed upon the natiral aging-related changes in autonomic reflexes.

Cardiac problems can also lead to fainting, for example and irregular rhythm or a structural cause.

What does this mean for Mrs. Clinton’s health?

Mrs. Clinton is under the care of a physician and had a thorough work up when she fainted in 2012 and a documented annual exam in 2015 so we can exclude every heart condition as a cause.

Using the San Francisco Syncope Rule Mrs. Clinton is likely at low risk from this event: 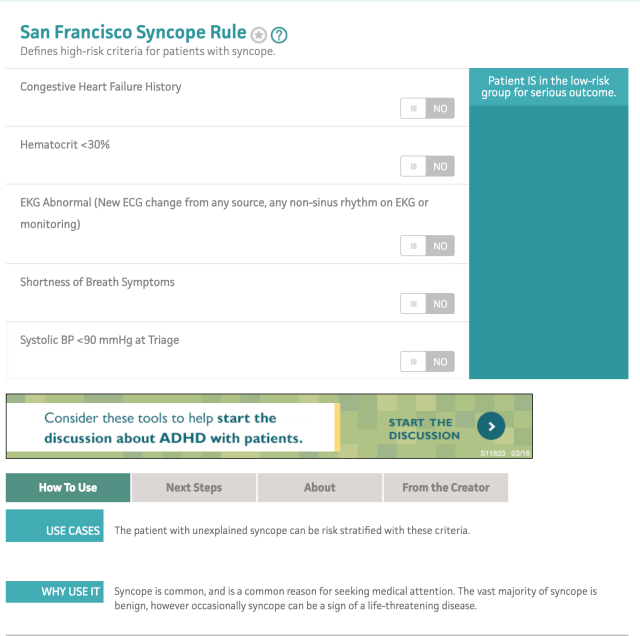 (please note the line at the bottom indicating the vast majority of syncope is benign).

I chose “no” for shortness of breath as I am pretty confident that if Mrs. Clinton did have shortness of breath she would have been taken to a hospital. What was her blood pressure? Heard to know, but as she recovered quickly it was not likely below 90 mmHg.

We can exclude congestive heart failure and a low hemocorit (low blood count) based on her doctor’s letter in 2015: 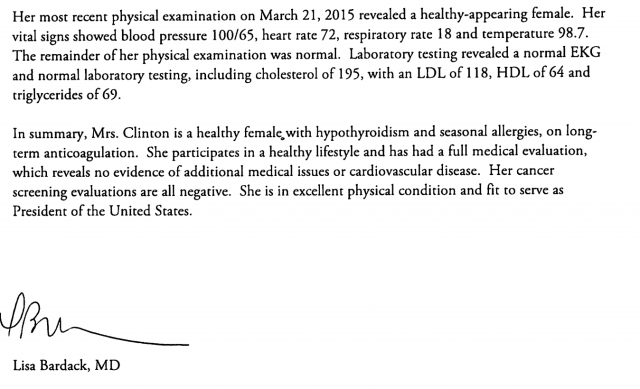 A witnessed almost-syncope or syncopal event provides a lot of information because we know what was happening at the time. She was standing in the heat in a suit. If she was wearing Kevlar that would have obviously contributed to the heat. Based on what was happening at the time and her medical history Mrs. Clinton’s near-syncopal event is almost certainly the result of prolonged standing in one position and heat and possibly dehydration and not due to some secret sinister illness.

Fainting is scary and dramatic, but it’s often “nothing.” Really.

Even when patients faint at home and are brought in by ambulance and no one can tell you what happened 20-50% of the time no cause for the fainting is found.

In this witnessed situation with an unconcerning medical history with a prompt recovery there is no medical cause to sound an alarm.

This quote from a review article in American Family Physician sums it up nicely:

Patients at low risk of adverse events (i.e., those with symptoms consistent with vasovagal or orthostatic syncope, no history of heart disease, no family history of sudden cardiac death, normal electrocardiographic findings, unremarkable examination, and younger patients) may be safely followed without further intervention or treatment.

Think about the last time you knelt for too long then stood up quickly and felt woozy and had to grab something. That was near-syncope. It happened because the blood pooled in your legs and then when you stood up quickly for some reason it didn’t get back to your heart fast enough and your brain was temporaily short changed. It doesn’t mean you are on death’s door it means you knelt for too long and stood up too quickly.

In reality the most common serious consequence of syncope and near-syncope is injury from a fall due to loss of consciousness. This happened to Mrs. Clinton back in 2012.

If Hillary Clinton is a “fainter” then so is George H.W. Bush.

George H.W. Bush vomited and fainted at a State dinner in 1992. He felt warm (experienced near-syncope like Clinton did). He thought he would be okay, but he fainted. It happens.

Could Mrs. Clinton wear short sleeves to events that are hot? That’s what I do. I would be worried about fainting in a suit outside on a warm day, but I apprecaite if Mrs. Clinton might be hesitant to do this given how Michelle Obama has been critisized repeatedly for wearing sleevesless dresses.

The biggest medical concerns with fainting are the following:

1) Is there some concerning underlying medical cause. In this situation for Mrs. Clinton the answer is no.

2) Was there a need for medical resuccitation? No, she recovered very quickly with supportive care.

Mrs. Clinton felt faint. It was dealt with appropriately. It looked dramatic, but it’s ok.

And so is she.

Post updated to correct the typo in President Bush’s name.

Comments with insults won’t be approved.

A lot of people are having trouble with the no insults requirement so comments are now closed.