This clip of Dr. Bornstein is making the rounds. In it he speaks about some background leading up to the five minutes he spent writing Trump’s medical letter.  He says:

“He called and said the Clinton organization was going to publish a letter on her health and I know her physician and I know some of her health history which is really not so good, so I said why not”

Did Dr. Bornstein betray some kind of confidence or make a HIPAA violation?

If Dr. Bardack, Mrs. Clinton’s doctor, actually told Dr. Bornstein about Clinton’s health then Bardack is the one who would have committed the HIPAA (privacy) violation, but I seriously doubt that happened.

When Bornstein says he knows Bardack I think he means he knows of her, not that they are BFFs and meet for coffee and chats about patients. When I hang out with my friends who are doctors we don’t discuss patients, so even if Bornstein and Bardack were buddies the idea that she would spill private medical information about any patient, never mind a high-profile one like Mrs. Clinton, is very unlikely. In addition. Bornstein is a gastroenterologist and Clinton has no GI tract issues so it is just ridiculous to assume she would have discussed Clinton’s care with him. Dr. Bardack will know much more about blood clots (the pertinent part of Clinton’s history) than Bornstein. In addition, Dr. Bornstein graduated from medical school in 1975 and Dr. Bardack graduated in 1990 so there is likely a 15 or so year age gap between them and they have different specialities, the idea that they move in the same medical circles is unlikely. Might they have met at medical society functions? Possibly, although gastroenterologists typically don’t go to the same meetings as internists. Lots of doctors know of other doctors, but knowing who they are and saying “hi” at a meeting isn’t the same thing.

As for Bornstein’s claim he knows some of Clinton’s health history? Of course he does, WE ALL DO. Mrs. Clinton instructed her physician to release her medical letter in July 2015. Mrs. Clinton’s dehydration, fall and concussion were covered extensively in the news back in 2012. Dr. Bornstein told NBC that he “thought about it” (meaning the letter) all day and then wrote it in five minutes. He wrote his letter on December 4, 2015, so obviously he had access to Clinton’s far more detailed letter and parts of Clinton’s health history as it was released five months earlier. Given Bornstein spent five minutes writing the letter it is hard to know if he read Clinton’s letter for reference or not.

I think Dr. Bornstein was trying to be coy to make it seem like he had some kind of inside information, however, I’m guessing the only thing he knew about Clinton’s health history was what he read online or in the paper or saw on the news. 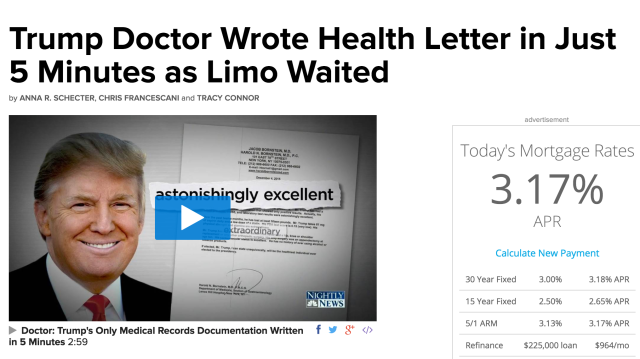