When IUDs go terribly wrong, screams the headline. It sounds like the lead in to a horror movie. 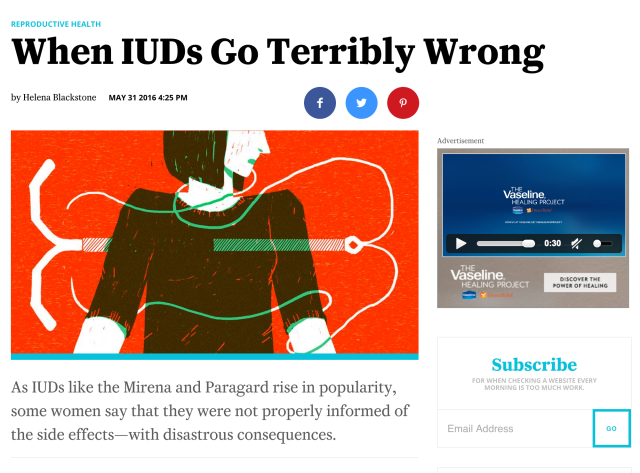 The piece starts with a snippet of accurate information, noting that the use of IUDs are on the rise. This is a good thing. Studies tell us that IUDs have the highest satisfaction rate and are the method most women are likely to stay with at one year. Oh yeah, they also have the lowest pregnancy rate and they reduce abortions by reducing unplanned pregnancies. But instead of talking with the women who have had good experiences with the IUD (for balance) or reviewing any of the safety studies (and there are tons), the reporter presents an exercise in confirmation bias with two women who had a bad experience tied up with a bow by an OB/GYN who has incorrect information about IUD safety.

The piece does quote Dr Sarah Hardman who is on “the Faculty of Sexual and Reproductive Healthcare at the Royal College of Obstetricians and Gynecologists,” so an expert. Her advice is sound, that IUDs are one of the best ways to prevent pregnancy and that the “contraceptive failure rate with typical use (the way women actually use it) of oral contraception is about nine percent. This contrasts with a failure rate of less than one percent for intrauterine contraception.”

But why bother with facts when you can contrast them with more scare tactics, such as the “IUD is not suitable for a significant proportion of women for whom it causes excessive pain.”

When women choose an IUD they are more likely to be using that method at one year versus any other method of contraception. We know that because of many studies. It is actually quite rare that an IUD doesn’t fit, this happens about 4% of the time. Most women are actually “suitable” for an IUD. Some women do have pain with insertion, but studies tell us most women do very well. That is called science, something the reporter is not concerned with. You know what does increase pain? Anxiety, like the anxiety women get from reading horror stories about IUDs. There is data that tells us that 67% of women report their IUD insertion as a pain score of 4 or less. Another study looking at the Mirena and Skyla found 65% of women reported their pain as none or mild.

I think it’s great to raise awareness, but do it in a thoughtful and responsible manner. For example, women who report that they have pain with pelvic exams are more likely to have pain with an IUD insertion. Women who have pelvic pain or pain with sex are more likely to have pain with insertion. We should educate women that about 1/3 report pain scores or 5 or greater and discuss strategies for identifying if they may be at greater risk for pain and develop a plan for trying to lower the pain, not scare people with incorrect information.

Then there is the second patient story, which makes no sense. It actually sounds like the string went missing not the IUD. The doctor initially couldn’t find the strings and so he incorrectly said it  must have been expelled (again, bad doctor, not bad IUD). After an ultrasound was done the “IUD was revealed to be still inside her, where it could have perforated her uterus and damaged her organs.” This is incorrect, if the IUD could have perforated her uterus it must have been inside the uterus, so it would be safe. If the IUD was at risk of perforating organs it would have already had to have perforated the uterus. What this sounds like is the strings coiled up inside or they were cut too short so couldn’t be seen. This is not dangerous. This does not mean the IUD will move freely around inside the abdominal cavity stabbing organs. It means removal might be a bit of a hassle and it is an inconvenience and can be a little frightening while you figure out what is going on, but it is not a safety concern. The next step is an ultrasound to see if the IUD is positioned in the right place.

But Helena Blackstone, intrepid reporter that she is, doesn’t put a picture of an ultrasound up with a properly placed IUD, she puts up an x-ray of an IUD that has perforated from Wikipedia. This is misleading. It’s like putting up a picture of a totaled car to represent a story about a flat tire and is unethical in my opinion.

This paragraph is also medically incorrect “When her next doctor removed the IUD, she was shocked. She said that Stone should never have been fitted with such a large one for her very small cervix,” but the size of the cervix doesn’t have a bearing on the size of the IUD and whether it will fit it’s the length of the uterine cavity. In the U.K., where I assume the piece comes from given the Royal College mention, there is 6.5 cm copper IUD and a smaller 5 cm one. Some women won’t fit a slightly larger device and so a smaller one may be an option, but that’s why we measure the length of the uterus before insertion. It sounds like Ms. Stone had a bad experience, but that doesn’t sound like it is the fault of the IUD. It is good to highlight the possibility of missing strings and the fact that a small percentage of women (about 4%) can’t be fitted with an IUD, but that is not how the piece reads. At all.

And it gets worse. Blackstone states that one study shows over 70 percent of women who had never had a baby discontinued use of the copper IUD within one year and she quotes Dr Ayman Ewies who says ominously, “I would never insert it in a woman who had never had children before, because of the risk of infection.”

Wrong and wrong. The “study” Blackstone links to is a review article that says about IUDs and women who have not been pregnant, “a randomized controlled trial that included 1,170 nulliparous women using the standard Copper T-380A, the Copper T-380Nul, and the Multiload Copper 375sl demonstrated lower expulsion rates (3.3% vs 1.8%,P < 0.001) and higher continuation rates (85.4% vs 29.5%, P < 0.001) in nulliparous women with the Copper T-380Nul compared with the traditional Copper T380A while maintaining comparable efficacy.” This doesn’t mean 70% of women discontinue the Copper IUD, it means one Copper IUD had a much higher continuation rate than the other, i.e. one IUD seemed better than the other. It’s also a 2003 study, newer data tells us that more than 77% of women are still using their IUD at 2 years. This is higher than any other method of contraception.

The study Dr. Ewies is quoted as referencing indicating the Mirena is removed in almost 50% of women by five years because of side effects is an abstract from 2007 and remains unpublished in a peer reviewed journal.  The Contraception Choice study tells us that 78% are still using it at 2 years as does other data. As this study matures we will get more prospective data on longevity and reason for early removal. About 60% of women do have their IUD removed by 5 years, but often there are complex reasons.

The complication rate with an IUD insertion is well-published and is 1.5/1,000. That doesn’t mean IUDs are bad any more that it means if you have a complication in your pregnancy that being pregnant is bad. This is just information women need to make informed decisions. The trade off for worry free, high user satisfaction, highly effective contraception is a complication rate of 1.5/1,000. We all make choices, but we need accurate information to make the right ones.

If Ms. Blackstone has actually read the review piece that she quoted she would know all of this information, but in what can only be described as extreme confirmation bias she cherry picked the one article that suited her purpose and then used the data incorrectly to scare women.

The piece ends with the thought that IUDs are “what people mean when they talk about the injustice of everything that comes with being a woman.”

Uncaring providers and one who may have selected the wrong IUD or had a poor insertion technique doesn’t mean the IUD is bad.

There is no evidence at all to support any of Blackstone’s claims, the piece is one big exercise in tabloid journalism and confirmation bias.

You know what is an injustice to women? Writing this drivel and passing it off as information.

On my scale of crappy medical information (5 being the worst) I give this 4 1/2 GOOPS.  I subtracted 1/2 point for the snippet of good information provided by Dr. Hardman.

The original  headline identified the source publication as Vice, technically that is true but my journalism friends tell me Broadly is the “vertical” and so should be identified as the source. The piece has been updated to reflect that change.