Today’s episode of Gunter v. GOOP involves the post on lube, written of course by a naturopathic doctor, for Gwyneth Paltrow’s tepidly awaited first sex issue. After all, why ask a board certified OB/GYN when you can ask someone with infinitely less training in both medicine and science. Want to know about naturopathic training, read this fantastic piece by a naturopathic doctor who became disenfranchised when she realized her training was clearly insufficient to provide safe medical care.

The piece on lube starts with the typical heart wrenching plea about chemicals and focuses on the mantra that basically everything else except a food oil is potentially unsafe for the vagina. It’s a mixture of the most superficial knowledge on the subject spiced  up with fear mongering that misses most of the major points on how to select the best lube and why some irritate. There is little, if any, useful information.

Parabens in lube are not the great evil of our time, but stoking that kind of fear drives people to alternative medicine practitioners so it’s a pretty good gig.  Parabens include methylparaben, ethylparaben, propylparaben, butylparaben, isobutylparaben, isopropylparaben, and benzylparaben. They are used as preservatives in cosmetics and pharmaceuticals because they have an excellent toxicity profile. They have been used for over 50 years, however, as our understanding of science and laboratory testing has improved we now know that paraben compounds can act like weak estrogens. Any substance that isn’t a true estrogen but can act like one is called an endocrine disrupter. It is plausible that exposure to these endocrine disruptors, especially prenatally or extensively during childhood, could have consequences. There are links between exposure to endocrine disruptors and some diseases, but we don’t really understand the cause and effect. It could be just association, it could be a combination of factors, and it could be the parabens. The science is in no way straightforward. For example, soy has a genuine endocrine disruptor as does clover, wine, hops, Brussels sprouts, and walnuts. Many of the studies have methodological flaws. For example, one widely touted study on parabens in breast cancer tissue didn’t have normal tissue controls. It’s not wrong to ask the questions, it is wrong to draw broad conclusions and scare people.

What about allergic reactions to parabens? These are exceedingly rare, that is one reason why the compounds are used so ubiquitously. Parabens also have one of the lowest risks of causing contact dermatitis. If you feel irritation with the lube, it’s very unlikely to be the paraben.

Some people have wondered, based mostly on older data, if parabens could be toxic to sperm, but this study found no connection between urinary paraben levels, hormones levels, or sperm quality.

If it’s safe to eat it’s generally safe to apply.

Uh, no. Honey, cinnamon, vinegar, lime juice, and oregano are all things people consume and are all things I’ve seen cause irritation or health issues in the vagina. We scientifically inclined providers decide if a something is a candidate for a lubricant not based on whether it will kill you if ingested orally, but rather based on osmololality, pH, tendency to cause allergic and irritant reactions, and whether studies tell us if the lubricant can have unanticipated consequences on the vaginal flora or sexually transmitted infections (STIs). Dr. Ney might not know that because she is too fixated on parabens.

Osmolality is basically the concentration of molecules in water, so low osmololaity means fewer molecules and a high osmolality means more concentrated. Water wants to move from a low osmolality to a higher one (basically it wants to move from dilute to concentrated to even things out). If the osmolality of the lube is greater than the vaginal tissues water will move out of the vaginal tissues. This dries the vaginal lining (mucosa) leading to irritation and potentially micro abrasions from the friction of sex. This can paradoxically cause pain with sex as well as increases the risk of sexually transmitted infection (STI) transmission.  If the osmolality is less than the vaginal mucosa then water is drawn into the cells, which plumps them up (not thought to be a bad thing). The normal osmolality of vaginal secretions is 260-280 mOsm/kg and the World Health Organizations recommends using lubricants with an osmolality < 380 mOsm/kg. They recommend against lubricant with osmolality > 1,200 mOsm/kg. Dr. Ney and GOOP fail to address this most important point.

Glycerin (which is glycerol) and propylene glycol are found in many water-based lubricants. They can act like preservatives and because they have a high osmolality they pull water out of the cells. This contributes to the slippery feel. The WHO recommends the total glycerol content should be less than 8.3%. Because a high glycerol/propylene glycol content typically means a high osmolality I recommend against them (they are only in water based lubes). There is also no convincing evidence that glycerin causes yeast infections, the irritation that can result is osmolality related. The science matters.

I have many patients who use coconut oil without issue. This is anecdotal, meaning it’s just my experience so may not be true medically as it is unstudied. I’m not aware of any proof that it has antimicrobial properties beneficial for the vagina.

You don’t need to know your latex farmer

The reader is basically left with the idea that parabens are the tool of Satan so natural oils are the only way to go if you really want to be safe, but tough luck if you want to use latex condoms. And latex condoms themselves get some shade. Use them, but oh gosh, they might be made with chemicals! Dr. Ney is worried about nitrosamine, “a known carcinogen” and “while the amount in condoms is very small, we still need to be mindful of our total daily exposure to chemicals and toxins.” Car exhaust is a known carcinogen, so I assume Dr. Ney never goes into a city and only travels by horse and buggy, you know, to be mindful of her total exposure and all. Sunshine is a known carcinogen, so I guess Dr. Ney never goes outside.

This kind of advice is dangerous. Yes, N-nitrosamines have been found in rubber products like latex condoms and yes they are carcinogens. During intercourse about 0.6 ng of nitrosamines may migrate in the female genital mucous membranes. Using 1 condom a week for 30 years results in about 0.9 microgram of absorbed nitrosamines. Animal studies suggest that topical application of about 1 g (and that’s not spread over 30 years) is a concern. So 30 years of condoms once a week is one millionth of that single carcinogenic dose. Many meat products contain nitrosamines at doses 1,000 or more times that in condoms, so perspective is needed. Then there is the fact that cancer and condom use has been pretty well studied and condoms LOWER a woman’s risk of cervical and vaginal cancer. So latex condoms don’t cause cancer.

Condoms protect women from things we KNOW can harm them, like HIV, gonorrhea, and HPV. Maybe they don’t learn about those in naturopathic school?

GOOP and Dr. Ney must have never heard of silicone based lubes and polyurethane condoms

Silicone products are not absorbed and don’t have osmolality issues because they don’t have water so they really have no down side. We know silicone is safe in medical products. Polyurethane condoms are definitely a good option (that’s also what female condoms are made of), but maybe the chemical sounding name was just too much?

GOOP so interested in empowering women but not even mentioning female condoms.

OK, here are my evidence based recommendations.

Don’t worry about parabens. Try and avoid them during pregnancy, but if you follow my lube recommendations you won’t be exposed to them anyway so it’s really moot.

Don’t use lubricants with Chlorhexidine gluconate, this is a bactericidal compound. It is in KY Jelly and in one study completely killed all the Lactobacillus species (good vaginal bacteria).

A lot of the warming liquids have very high osmolality, so I’d skip them in general.

With a water based lubricant aim for a pH closest to the vaginal pH, around 3.5-5.0. It is unknown if temporarily raising the pH could have a negative effect on vaginal bacteria. If using a water-based lubricant also look at the osmolality, bellow 1,200 is what you want. I have included two charts below from Smitten Kitten for reference.

As long as you are not using KY Jelly, the other products with polyquaternium, or a warming liquid and you are not having any issues and you are happy with your product, you probably don’t need to switch, but if the osmolality of what you use is super high you might want to try something else just to see.

Generally I recommend a silicone based lube because there is no osmolality issue to address and no evidence they damage the vaginal mucosa or bacteria or that they facilitate HIV replication.  Although a silicone based lube could damage silicone toys, so having a water based option is good too. You could also use coconut or olive oil with your toys or for lube as long as you don’t need latex condoms for contraception or disease protection.

And one more thing, drinking 8-10 glasses of water a day will not keep your vagina moist you will, however, pee more. 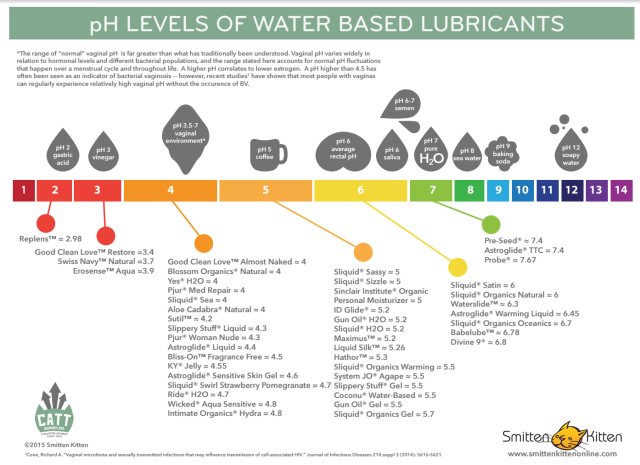