The post reports that Dr. Damian Marino, a researcher from Argentina, claims that 85% of tampons he tested contain “cancer-causing glyphosate” and “62 percent also tested positive for AMPA, the environmental metabolite.” This data was presented at the “3rd National Congress of Peoples” (another website claims this was presented at the “Third National Congress of Doctors of Fumigated Peoples”). Dr. Marino is at the University of La Plata.

I have some issues.

Looking into the matter further the link provided (via Google translate) isn’t an article but appears to be some kind of press release.

Obviously, when researchers make claims about contaminants in products (or about anything) we need to make sure their methodology is sound and their conclusions accurate. Without the methods, data, and their statistical analysis that isn’t possible. Someone saying they did a study doesn’t count. However, digging a bit further it appears that Dr. Marino has published in this area in peer-reviewed journals so I will assume that his methodology is sound. If any chemists or other researchers in the field can offer insight into his methodology, please post below.

All I have to go on is the 10 minute video. I don’t speak Spanish well enough to translate and the slides are hard to see, but it appears as if he is reporting a maximum of 4 micrograms/kg or 0.004 micrograms/gram in menstrual products (this is combined glyphosate and its metabolite AMPA).  Marino’s own research states that control areas in the ground without application of herbicide have 0.005 micrograms per gram. So it appears as if tampons and pads have the same amount of glyphosate as everything else in or from the ground. This makes sense as cotton is a plant and many menstrual products contain cotton (some are rayon and some are a blend of both). If you want to more know about what is in them and how they are made here is a link from the FDA. 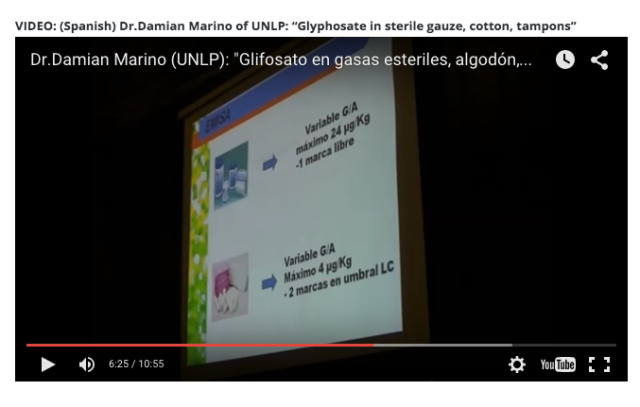 It appears that the products at the bottom of the slide are tampons without applicators and a pad (but it’s hard to be 100% sure as that is the best I could do with a screen shot or watching the video).

Ok, but what it glyphosate and why should I care/worry?

Glyphosate is in herbicides and it very routinely used everywhere. The World Health Organization recently labeled Glyphosate as a probably carcinogen. This is what they have to say:

For the herbicide glyphosate, there was limited evidence of carcinogenicity in humans for non-Hodgkin lymphoma. The evidence in humans is from studies of exposures, mostly agricultural, in the USA, Canada, and Sweden published since 2001. In addition, there is convincing evidence that glyphosate also can cause cancer in laboratory animals. On the basis of tumours in mice, the United States Environmental Protection Agency (US EPA) originally classified glyphosate as possibly carcinogenic to humans (Group C) in 1985. After a re-evaluation of that mouse study, the US EPA changed its classification to evidence of non-carcinogenicity in humans (Group E) in 1991. The US EPA Scientific Advisory Panel noted that the re-evaluated glyphosate results were still significant using two statistical tests recommended in the IARC Preamble. The IARC Working Group that conducted the evaluation considered the significant findings from the US EPA report and several more recent positive results in concluding that there is sufficient evidence of carcinogenicity in experimental animals. Glyphosate also caused DNA and chromosomal damage in human cells, although it gave negative results in tests using bacteria. One study in community residents reported increases in blood markers of chromosomal damage (micronuclei) after glyphosate formulations were sprayed nearby

This is what probably carcinogenic means according to the WHO:

It is true that in California glyphosate will now be labelled as a carcinogen, but if you live here you know that basically everything is labelled a carcinogen. Every parking garage and coffee shop warns you of the carcinogens lurking within (yes, coffee production can produce a carcinogenic). I am sure if we could label the sun as a carcinogen in California we would. There are so many signs in San Francisco that in my opinion we have surpassed alarm fatigue – I no longer notice them.

According to the American Cancer Society alcohol beverage consumption is a known carcinogen and is listed in the same category as asbestos, so some perspective about carcinogen exposure is needed. The cancer risk of a chemical is related to not only it’s ability to damage DNA, but also the dose, route, and length of exposure.

So what does this all mean for your vagina?

Why? Well, applying logic there are two possible outcomes from this data (assuming it is correct):

If you are worried about chemicals and cancer you should be a lot more concerned about alcohol and coffee than tampons. Just saying.