This morning I read a very interesting article in the Washington Post about a Stanford program aimed at reducing physician burnout in academia. The article starts with the story of Dr. Greg Gilbert, a divorced emergency medicine doctor with kids. Instead of being exhausted from shopping and cooking etc after his long shift he is greeted at home with boxes from Blue Apron and ready-made meals courtesy of a program from Stanford.

“This gives me more bandwidth at work,” Gilbert said. “And because I can hang out with my kids and not be exhausted all the time, I’m able to be the kind of parent I’d always hoped to be.” 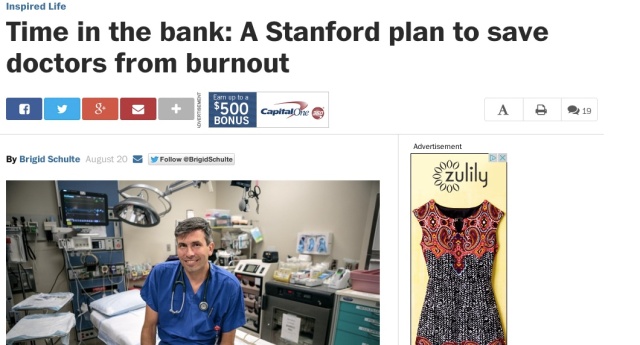 I want to be clear, I’m not dissing the program at all or the time constraints of a divorced doctor with kids (that is my exact demographic). I’d love to come home to prepared meals or a fridge full of groceries, but as I read through the article I realized that the program doesn’t seem that ground breaking at all – it is a wife and a secretary. Obviously not in the conjugal or traditional sense but in the 1950s-stay-at-home-mom-who-did-everything-plus-trusty-secretary-sidekick sense.

I thought back to the doctors who were my mentors in the 80s and 90s. Almost all were men and almost all had stay at home wives. That was also back in the day when each doctor had his own administrative assistant (with current budgets one administrative assistant now often covers an entire department). Those guys showed up at home to dinner on the table and didn’t have to deal with the mundane aspects of every day life, such as grocery shopping or cooking or childcare. They also didn’t have to worry about remembering to renew their medical licenses or booking their own travel for conferences or tracking down articles. I knew of administrative assistants who picked up passports and bought gifts for the wife. The few women doctors with kids didn’t appear to have the same support at home as their male colleagues and/or felt less comfortable asking their assistants to pick up their laundry or book their personal vacations. The ones with full-time nannies bitched less about cooking and cleaning, but they left me with stern advice – never, ever hire an attractive one. Female surgeons almost always make more money than their spouses and paying child support and alimony to your husband who you caught sleeping with the nanny when your Saturday case ended earlier than expected sucks in many ways.

My own experiences from two marriages were not that different, although there was no bikini wearing nanny. My burnout in academia wasn’t the job per se, I just couldn’t do my job and look after the kids and run a house. Even now that I am divorced and only have my kids 50% of the time it is a challenge. What do you do when your sewer backs up in the middle of the night and the plumber can only tell you he will be there after 2 p.m. yet you have a full clinic all day? Do you cancel clinic or live with the smell for a few days until you can clear your schedule without inconveniencing too many people? What if your dog gets really ill and you are supposed to be in the operating room in four hours? Those stresses add up.

The Washington Post article quotes data from Stanford that indicates my experiences and those I have heard and seen from mentors and colleagues are not unique, that women in medicine spend more time doing housework and family care work than their male counterparts. This may in part explain the higher rate of burn out in academia for women versus men. As divorce rates are close to 50% (if not higher) men in medicine are now feeling the same pressures. You just can’t do it all solo even when you only have your kids 50% of the time.

The article suggests that many women and likely divorced men leave academia, unable to juggle the publish or perish mentality, patient care hours, committees, and teaching with a viable home life. I wonder if some married men who do a lot of work at home (or who want to) also drift away from academia for the same reasons. Maybe they feel bad asking their spouses to always get the groceries or pick up the kids? These factors played into my decision to leave academia. I loved working at a University, but I didn’t love driving myself crazy trying to do it all and for less money than my male counterparts.

I found one line from the article particularly interesting, The program got its start when a former medical school dean, Phillip Pizzo, grew concerned that so many talented female doctors, including his own daughter, were foregoing promising research and other career avenues in order to juggle family demands.

I think it is wonderful that Dr. Pizzo noticed his daughter’s struggles and acted on it in a constructive way, but I was left wondering what kind of support Dr. Pizzo had at home to allow him to have a family life, a distinguished career, and run 50-70 miles a week? I’m not sure help with the groceries and meals would be enough support, although any acknowledgement that you can’t and shouldn’t have do it all on your own is a great start.

The idea of the Stanford program is interesting and if I could trade committee work for housework I’d do it in a pinch, although I can’t be on many committees because the ones that are right for me don’t work with my childcare schedule. I only have my kids 50% and I’m not giving up any of that time.

The idea that burnout might not be the work itself, but rather how the other tasks impinge on the time left is intriguing. If you can take up the slack in other ways might burn out be less of an issue?

I think it would be very interesting to see programs like this expand in addition to on site daycare. I remember several female doctors raving about the in-hospital daycare where I trained as a student. Sometimes the last patient of the day has a major issue that takes a long time to address and you just can’t ask a crying patient to leave because your daycare closes at 6 p.m. Hence why many of my female colleagues work 80-90% schedules so they can have that cushion to get the kids. And when you work less it does affect how many people perceive you in academia.

Unless your marital agreement involves one person being a traditional stay at home spouse, both people have to contribute significantly at home it’s just both people often feel like they are doing more than 50% of the work (a mathematical impossibility). I wonder how much a program like the one at Stanford could not only help keep more women in academia, but also take some of the hostility out of relationships that can build over time. They say marriages fall apart in tiny increments of resentment. Could programs like this lower the divorce rate for doctors?

Regardless, the Stanford experience doesn’t really tell women (and many men) anything new – almost everyone who works full-time and who has a family needs a “wife.” What is new is that maybe there are some non traditional ways to get that support without bringing marriage into the equation.