An interesting poster was presented at the 2015 Annual Meeting of the American Congress on Obstetrics and Gynecology (ACOG) – National Network Television News Coverage of Contraception in the Era of the Affordable Care Act (Dr. Elizabeth Patton and colleagues from the University of Michigan). The authors  evaluated the content of the nightly news segments of the three major networks (CBS, ABC, and NBC) for mention of contraception from January 2010 to July 2014 and the transcripts of potentially relevant segments reviewed.

The authors chose the national nightly news because it was the most uniform format. Cable news and Fox 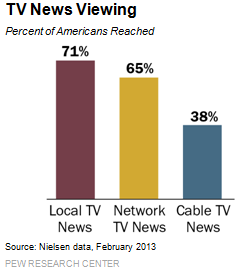 were excluded as they eschew the traditional nightly news for a talk show format and according to the Pew Research Institute these shows “tend to hammer away at a somewhat narrow news agenda that magnifies the day’s more polarizing and ideological issues.” But about the national news led by veteran anchors and supposedly seasoned reporters?

113 segments on contraception were identified and the transcripts were  coded for methods discussed, sources featured, and the inclusion of medical content. Here’s what the researchers found:

Most segments focused on contraception as a political and social issue, thus using the government and general public as sources seems appropriate. What about some of the other findings?

Talking to the Catholic Church MORE than OB/GYNs

Every time the Catholic Church or any other non evidence based organization, religious or other, is interviewed about anything to do with reproductive health an appropriate counter from a medical organization or professional should be included. This is because no one who speaks for the Catholic Church (i.e. clergy, bishop, or Pope) is qualified to speak on birth control or anything to do with reproductive health. At all. Ever. Especially on the nightly news. If the Catholic Church is quoted, then an OB/GYN (and not one who works for the every expanding Catholic hospital networks) should be interviewed to counter with something I like to call facts.

Responsible reporting would focus less on EC and pills and more on long acting reversible contraception, like IUDs, as these are the most effective and cost effective. IUDs were part of the same challenge to the contraception mandate as emergency contraception, so how 17% of stories addressed EC and only 4% addressed LARC is a bit puzzling. In addition, several excellent studies were published during these years touting the clear benefit of LARC over pills. Quite possibly some of this imbalance in EC-LARC coverage was related to the excessive coverage of the over-the-counter ruling for emergency contraception, but responsible reporting would A) downplay the significance of something already recommended by ACOG and B) add something along these lines to every story about EC -> “but remember, the most effective method of contraception is an IUD or an implant, so if you find yourself needing EC it’s probably time to discuss your contraceptive needs with your doctor.” I guess the media would have to speak with more OB/GYNs to know that.

What does this all mean?

Even though viewership is changing, the Nightly News still has a huge impact and it is somewhat disturbing to see imbalances, especially at a time when reproductive rights are being slowly eroded by many of our courts. The Nightly News still a large viewership and in addition a lot of what they report trickles down to the local news and most of their stories appear online and so have the potential to reach non viewers and be sourced in other stories. Getting it right (which would require the right sources) should be a priority.

It’s hard to know how much of this chatting with the Catholic Church and focusing on emergency contraception is gunning for controversy to get viewers, errors in reporting, missing the point in the story, clear bias, or an inability to find OB/GYNs willing to speak to the media (*waves hand*). All I know is there is something desperately wrong when the Nightly News is more likely to  source the Catholic Church while reporting on contraception and not the health professionals who have actually studied the subject. .