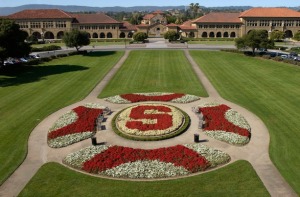 A young woman who was intoxicated and unconscious was allegedly raped by a Stanford student names Brock Turner (allegedly because it has not been proven in court). And not just any student, but a student athlete who was heavily recruited for the swim team (swimming is big at Stanford). Normally these kinds of stories have dismal endings for the alleged victim for in addition to the rape itself the allegedly perpetrators are rarely expelled from school or even kicked of their sports team never mind facing charges. But that’s not what happened this time at Stanford.

Two male students on bicycles spotted Turner on top of a woman who was clearly unconscious. Instead of just cycling away or giving a lame, ‘Dude, stop,” they intervened. Physically. They got him off the woman and held him until the police came.

The prosecutors are charging Turner.

Turner is not allowed back on campus.

Stanford was previously identified as a school with serious issues regarding their handling of sexual assaults and apparently they have been working hard to improve that, although we don’t know what would have happened had two good people not decided that rape is everyone’s business.  It’s sad that a victim’s word is often not enough and even worse when a woman can’t remember what happened (and so clearly could never have consented) she is simply dismissed.  However, this case is really important to me and not just because the University and the prosecutor and the police did the right things, but because two people thought that it was their business.

Once upon a time I was a young and had too much to drink at a party. Somehow through the Peach Schnapps’ goggles I thought leaving with 3 guys who I had never met before was a good idea. The next thing I knew my friend Jill was pounding on the hood of the car to force the driver to stop and then she hauled me out. I don’t remember anything else except waking up safely in Jill’s bed in clean sweats and a t-shirt. I could not have consented to anything the night before and while those guys could have been sweet gentlemen intent on driving me to my house, the facts suggested an alternate, less savory ending.

We all need to be more like Jill or like these two men at  Stanford. Sometimes we will be able to spot things before and sometimes, sadly, it will be for damage control.

We must talk about changing attitudes towards sexual assault, but we need to remember that also means being prepared to step up and step in.

Rape won’t stop until we all take the responsibility of ending it.