Four Republican candidates running for office this November have proposed over the counter (OTC) oral contraceptives as an answer to GOP opposition to contraception coverage under the Affordable Care Act (ACA). Apparently Corey Gardner, CO, Ed Gillespie, VA,  Thom Tillis, NC, and Mike McFadden ,MN, now have now seen the light and are invested in reducing “barriers” and having more “options for women for contraception.” In fact Gardner now says the pill should be available over the counter and “around the clock.”

Let’s put political maneuvering aside for a moment and just look at the issue of OTC contraception. Is that a bad idea?

Several countries have OTC access to contraceptives, so this isn’t a brand new idea (and many other countries have flirted with the idea). Levonorgestrel post coital contraception (Plan B) is already OTC so is making the regular pill similarly available an extension of that?

The American Congress of OB/GYN (ACOG) reviewed the studies in detail for a 2012 Committee Opinion on OTC contraceptive pills, which supports the idea and they reaffirmed their support in their most recent statement (September 9th):

What about safety? While it is true that birth control pills with estrogen do increase the risk of blood clots this increased risk due to the pill is about 4 per 10,000 women. There are some medical contraindications to estrogen in the birth control pill, such as smoking over the age of 35 and migraines with aura, but people with kidney disease shouldn’t take ibuprofen and people with liver disease shouldn’t take acetaminophen.Many more people become sick (and many die) from acetaminophen related liver disease or poisoning than are affected by hormonal birth control. A blood pressure measurement and screening for contraindications would be optimal (and could easily be done by a pharmacist), but in reality contraceptives are much safer than many medications currently available over the counter.  We also know that women take the pill about as accurately when they get it over the counter compared to prescription.

So if OTC oral contraceptives are the same safety wise as many other OTC medications, a physical exam isn’t needed, and getting the pill from a doctor as opposed to picking it up over the counter doesn’t result in better or worse pill taking then why not embrace this new GOP message?

Cost is the first issue. It is true some generic pills are currently $9 a month, but they are free under the ACA and $9 is a lot for someone living below the poverty level. However, one important fact about pill prescribing that is alway missed my both politicians and the media is that doctors don’t prescribe one pill pack at a time because studies tell us receiving multiple packs at once improves compliance. If a woman can get three (or better yet seven) packs up front then she is more likely to stay on the pill. If pills went OTC all of a sudden it’s $27 or $49 to get pills in the most evidence based (and effective) manner. Many people don’t have the budget for that. Not having several packs up front leads to gaps in contraception coverage which leads to unplanned pregnancies.

How will OTC pills happen? Have the mechanics of this decision been carefully considered by 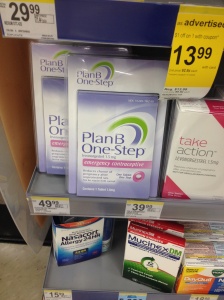 the candidates? Would the pills be truly over the counter or would a pharmacist have to get them from behind the counter. Would the pharmacist ask screening questions? What if the pharmacist refused to do this? Would prices remain the same or would we see prices skyrocket to morning-after-pill prices ($39 for a generic in California!). You can’t say you are for OTC contraception and not have a plan. Reproductive’s health care isn’t some vague concept to be bandied about in debates.

But the real concern is the smoke and mirrors of OTC birth control pills deflecting attention away from the fact that contraception is health care as well as the side bar of the ACA and IUDs. Anyone who really wanted women to have “more options” and “contraception around the clock” would support universal coverage of all methods of birth control. They would want women to have free and easily available IUDs and Implanon (long-acting reversible contraceptives or LARC) because these methods have the lowest failure rates and have far greater continuation rates at a year compared to the birth control pill. Study after study shows if you want to reduce unplanned pregnancies (and hence abortion) you invest in IUDs. If you care about women’s health care you would care women have access to all methods of contraception, especially the most effective ones.

If you look at oral contraceptives in comparison to other OTC medications there is no reason for them to be prescription and women could clearly self-screen for most absolute contraindications using checklists, but making contraception over the counter is not an answer to religious opposition to the contraception mandate in the ACA. Politicians, some who have supported personhood measures, waving vague plans for over the counter birth control pills as a sign of support for greater contraceptive access is nothing more than a slight of hand to try to appeal to women voters while deflecting attention from the real issue, that contraception is health care and every method should be covered and freely available.