Brain death is death. This is one of the definitions of death. Even in Texas.

Because brain death is death a do not resuscitate (DNR) order or invalidating a DNR are both meaningless, because you don’t do procedures on dead bodies. This is why taking someone off a ventilator who is brain dead is not homicide, assisted suicide, or even following a DNR, it is simply the cessation of forcing air into a dead body.

So what of this terribly tragic case in Texas of Marlise Munoz found down on the floor by her husband, Erick, in November when she was in the first trimester. The reported cause of her circulatory arrest is pulmonary embolism (more common in pregnancy).  Munoz was a paramedic as is her husband and while she did not have a living will her family (her parents and husband) are well aware that she did not want life support.

The family report that their ability to carry out Marlise’s wishes are being ignored because of a Texas law that invalidates do not resuscitate (DNR) orders in pregnancy.

A spokesperson for John Peter Smith, the hospital in Texas where Ms.Munoz is on a ventilator, is claiming they are only following the law (which, by the way, is not a Texas-only Handmaid’s Tale). Although, it is important to know that law explicitly does not invalidate other laws, meaning brain dead in Texas is still dead, whether you’re pregnant or not.

So there is a huge disconnect here. A law that invalidates a DNR can not apply to a dead person.

The possible scenarios are:

1) Ms. Munoz is not brain dead. She has been tested and did not meet the criteria. She may have severe brain damage and be in a vegetative state, but she does not meet the criteria for brain death. Her family has confused this with brain death, although given her husband is a paramedic I think that confusion would be unlikely. In this situation the Texas law about DNR would sadly apply. It’s a terrible law and essentially reduces women to incubators, allowing the state to defile a woman against her wishes never mind ignoring the obvious concerns about fetal well-being from a catastrophic lack of oxygen. The kind of terrible event that could cause a maternal vegetative state would likely have resulted in even a longer interruption of oxygen supply to the fetus as all organs are sacrificed in catastrophic events in a desperate bid to send oxygen to the brain. A “strong” fetal heart rate doesn’t in any way guarantee fetal health. Anencephalic fetuses have normal heart rates until birth. In this case, the fight is with the state and the hospital is sadly following a terrible, misguided piece of legislation.

2) Ms. Munoz is brain dead so the Texas law about a DNR doesn’t apply. In this case the hospital is A) is following some bizarre pro-life agenda B) can’t read/understand legislation C) has an anti-brain death doctor in the ICU (apparently they exist, who knew?). This scenario has John Peter Smith hospital defiling a dead body as the Texas legislation can not apply here.

3) John Peter Smith hospital has not checked Ms. Munoz for brain death. If you haven’t ascertained if someone is dead, then you can’t be compelled to withdraw life support by the family. The reason? Pro “life”? Anti-brain-death? Fear of alienating patients? Fear of affecting fund-raising? Not understanding the legislation? Who knows?

There are some worrisome facts about the hospital and how they are handling things. Ms. Munoz’s mother reported to  the New York Times that, “…we have no input in the decision making process.” Then there is the intimation that they are going to do a 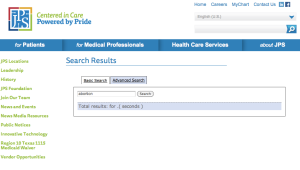 viability test around 24 weeks (there is no such thing, BTW ), but perhaps if the staff/hospital thinks they can get a fetal heart rate at 24 weeks they can somehow circumvent the brain death legislation (although how they could do a c-section or any invasive procedure without family consent is beyond me). But why would the family feel alienated if the hospital is “only following the law.” Wouldn’t the common enemy be the state? By the way, I did a search on the John Peter Smith website for “abortion’ and not one hit returned. Nothing. Also they offer emergent care for rape victims, yet the web site doesn’t mention post coital contraception. Maybe they offer it and are just flying below the radar, but, well, hmmm. Why wouldn’t you say that you offer post coital contraception if your are promoting your rape trauma care program? And finally, the residency at John Peter Smith hospital does not offer abortion training.

What is clear is that Ms. Munoz’s husband and parents feel very alienated by the hospital and powerless. If the hospital were only following state law, I think their anger would be directed only at the state. Also, given Mr. Munoz’s training as a paramedic he would clearly be medically literate enough to handle the in-depth discussions of ICU care and the nuances of brain death versus a coma or vegetative state (the family has reported that Ms. Munoz is brain dead).

It’s a tragedy any way you look at it, but who is really keeping Ms. Munoz on life support against her wishes? Texas or John Peter Smith hospital?