Part of Katie Couric’s “controversy” on her show about the HPV vaccine was the claim by her expert, Dr. Diane Harper, that the vaccine only lasts for 5 years. I mean, why promote a 5 year vaccine to adolescent girls that will wear off and leave them at risk during their 20s?

The problem with this “controversy” over the duration of vaccine effectiveness is that it is entirely manufactured.

Dr. Harper is a researcher who has participated in many of the HPV vaccine trials. This means she enrolled lots of patients and was an author on many papers, but she did not invent or design the vaccines. She may have played some role in study design and data analysis. She (and her institution) also received lots of research money in return. As an aside, Harper is often been identified as the lead Gardasil researcher. She was an author of the original FUTURE study, but not the lead investigator.

A paper authored by Harper (and others) from 2009 published in the Lancet specifically shows that the HPV vaccine (Cervarix) is effective for 6.4 years. Yes, Harper participated in and published a study that shows an HPV vaccine (at the time in 2009) was effective for at least 6.4 years. Dr. Harper has written extensively (and very favorably, at least in 2011) on Cervarix. She writes in a 2011 opinion piece (ISRN Obstetrics and Gynecology, Harper and Vierthaler) that Cervarix offers “protection against HPV 16 and 18 lasting at least 9.4 years.”

If Couric were on her show in any journalistic capacity she should have immediately asked, “Why would you say the HPV vaccine only works for 5 years, Dr. Harper, when in your 2009 publication you write, and I quote, Our findings show excellent long-term efficacy, high and sustained immunogenicity, and favourable safety of the HPV 16/18 AS04-adjuvanted vaccine up to 6.4 years. Is your issue specifically with Gardasil?”

However, studies indicate that Gardasil is also effective for longer than 5 years. Data presented last year from two studies expand the proven effectiveness of Gardasil to 8 years. I’m not sure how Harper could be unaware of this data. It’s not exactly brand new in HPV circles.

Shouldn’t Couric have actually read some of Harper’s work before having her on as an expert? Shouldn’t she have asked for proof about this whole 5 years claim? Shouldn’t she have fact checked? Unless of course Couric’s agenda (or that of her producers) was to A) drum up a false controversy or B) promote an anti-HPV vaccine stand (rhetorical musing). If Harper felt Cervarix were truly better, that would have made for an interesting discussion. I’m not sure there is data to say it is better, but if she had a reason I’d want to hear it. Harper has written that antibody levels are higher with Cervarix versus Gardasil, however, studies also tell us that the effect of the vaccine doesn’t seem to depend on antibody levels.

For argument’s sake even if either HPV vaccine only worked for 5 years that doesn’t mean it goes to the reject pile. The Tdap vaccine requires a booster. Immunization against the flu requires a yearly shot. Might we find that people need a booster for the HPV vaccine at 10 or 20 years? Perhaps. Would that make it a bad vaccine? No.

Both HPV vaccines work for longer than 5 years. A lot longer. This is evidence based medicine. Some of this data comes from Harper’s own publications or data sets that she contributed to, yet she said otherwise and went unchallenged on national television. Now there’s a real HPV controversy for you.

Oh, and for anyone interested in safety, Harper’s own work also indicates that the incidence of adverse events with both of the HPV vaccines is the same as placebo. Again, why this wasn’t brought up against the two claims of vaccine injury, well, that’s just another controversy. 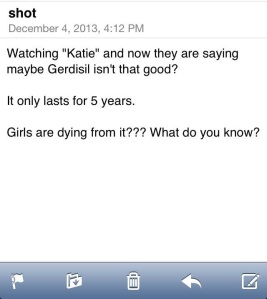 Note: an earlier version of this post inaccurately stated the 2009 Lancet study was about Gardasil