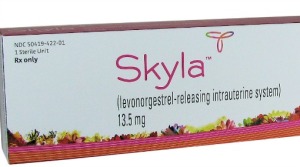 There is a new IUD on the market called Skyla. It is made by Bayer, the same manufacturers who brought us the Mirena. Like the Mirena it contains the hormone levonorgestrel, although there are a few differences. The main difference the company is touting is the smaller size. Clearly, they manufacturers are targeting nulliparous women with the promise that a smaller size might mean an easier insertion.

I have summed up Skyla and Mirena in this chart so you can compare them side by side:

What about pain with insertion? A randomized study was published this month (Obstet Gynecol Nelson et al November, 2013) ) where the women were blinded to which IUD they received (obviously the investigators knew which IUD they were inserted) gives us some more data. Over 2,800 women received a Skyla or Mirena (just over 1,400 in each group) and 96% of insertions (lumping both Skyla and Mirena together) were successful the first time and 65% of women reported their pain as none or mild. This is very reassuring considering 39% of women in this study had never been pregnant. Interestingly, the study did not report pain or ease of insertion specifically for Skyla versus the Mirena, bur rather lumped them together. It seems incredible to me given the data presented in the study that they didn’t have the breakdown by IUD. The study was funded by Bayer so it makes me wonder if there was actually no difference in pain or failed insertion attempts between the two and so they elected not to disclose that information. Sigh.

Abnormal bleeding patterns, breast tenderness, acne, headache, weight gain, pregnancy rates, and serious adverse events were the same between the two groups so there does not seem to be a side effect, efficacy, or safety advantage for Skyla over Mirena. The only statistically significant difference that came out in this study was a slightly higher incidence of ovarian cysts with Mirena over Skyla (13.8% versus 7.7% by 3 years).

The disadvantage to Skyla besides cost? If you are planning on needing contraception for a long time a shorter duration of use increases your risk, as the biggest risk with an IUD is with insertion the longer acting the IUD the safer.

The take away message is that Skyla is a fine contraception, but unless more data is released it seems like there is no real advantage over Mirena for anyone except perhaps for women with a history of recurrent ovarian cysts and of course Bayer as Skyla is more expensive per year of use.

It is no coincidence that Skyla comes at a time when the patent has expired (or is about to expire) on Mirena.