Oscar De La Renta reports that he was unsuccessful when he told Hillary Clinton to cut her hair, so who is behind this whole new shorter ‘do fiasco? The world needs to know.

It has been hush-hush ever since her mother first recognized her abilities. Being smart as a whip, a Yale graduate, a lawyer, and a gifted politician have all had little to do with her successes. IT WAS HER HAIR. She is a veritable modern-day Sampson. The media clearly suspected something for years, but despite all their reporting on her hair they never quite got the story quite right.

Some say Obama himself had Natalie Portman do his dirty work and sell Hillary on the shorter 2008 ‘do (I mean Hillary’s hair was so short she couldn’t have possibly kept a thought in her head) and then he had Ashley Judd step in when he needed Hillary back in top form for Secretary of State. “Tell her it makes her look younger. The ladies like that.” There was even a scrunchie staffer to keep Air Force One and embassies around the world stocked so those treasured tresses would never seem like a chore.

Someone must have turned De La Renta (he was long thought of as a democratic operative) though fortunately for women everywhere who hope to one day see a female president he failed. Our reprieve was sadly temporary, 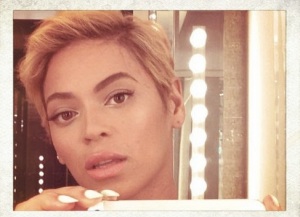 Personally, I suspect Beyoncé who is clearly a secret Republican what with that suspiciously timed pixie cut that has magically morphed back to longer hair. That selfie must have been from a GNO with Hillary, “Hey, Hillz, I just got 19, 421 likes on Instagram for my pixie cut, bet they’d like yours short too!”

It’s a good thing that glass ceiling is so thick. Hillary can use it as a mirror, because God knows short hair is a lot of work.