“Tell me about grandpa and World War 1,” I asked my dad.

“Well, he didn’t talk about it much,” he replied. “He said it was hell. He was in France, for three years I think, first in the cavalry and then he was a sniper. I believe he was quite a good shot.” And so ended my father’s knowledge, whether time had faded his memory (my dad is 84) or he never really knew is hard to say.

I remember asking my grandfather about his war experience myself. This was on one of our trips to England when I was growing up. My parents, who emigrated to Canada in the 1950’s, took the family back to England every three years for the summer. I spent a lot of time with my grandfather the summer I turned twelve. He was 88. We spent hours pouring over his stamp collection, his collection of cigarette cards, and his photograph albums. I remember clearly a sepia photo of him in uniform. Fueled by that lack of censorship that accompanies youth I asked him about the war.

He was an enlisted man, he told me. He was offered a commission several times, but did his best to turn it down. He had no intention of being an officer. “They led the charges,” he said, “And that’s who got shot first. I was happy to hang out in the back with the enlisted men.”

“Did you get shot?” I remember asking.

“Yes, twice,” was his reply. I also asked if it hurt, and yes, apparently it hurt a lot. And then we moved on to something else and I never asked him about the war again.

I’ve always wanted to know more, and thanks to the British Archives I do. Many service records from World War 1 were apparently lost, but my grandfather’s records, like the man himself, survived. Faded documents written in fountain pen, now microfilmed but not before the ink on many had simply disappeared with time.

Great Britain declared war on Germany on August 4, 1914. My grandfather, Sydney Gunter, enlisted one month later on September 4, 1914. He was 24 years old.

He signed up for Three Years with The Colours, also known as Short Service, meaning he committed to three years with His Majesty. If the war were to end sooner he would be discharged “with all convenient speed.” However, if it were not over in three years, well, he was enlisted until it ended.

His medical records say that he was 5 feet 9 inches and 154 lbs. Grey eyes, just like my father. He was a Private assigned to the 3rd Battalion of the Suffolk Regiment. He entered the Theatre of War on July 14, 1915. My birthday is July 14. I now wonder how that made him feel. I can’t imagine he ever forget his first day in France.

It appears as if he was on a base in England between enlisting in September of 1914 and heading the France the following year. The only proof I have of that is he was disciplined for being off base on January 15, 2015. I suspect he was out having, “a bit of fun.” The penalty was a formal admonishment and docking 1 day of pay. Apparently he had quite the sense of humor and enjoyed a party.

On Feb. 28 1916 he suffered a gunshot wound to the face and left arm as well as injury from grenade shrapnel. He was back “in the field” nine days later. I was not surprised to read that arm wounds carried a 25% mortality. Blood loss, lack of antibiotics, starvation, and constant stress all in a background of filth. How does a man survive a wound at all in that situation, never mind get back in the dysentery and rat infested trenches nine days later?

Along the way he was promoted to Lance Corporal and then Corporal. He was wounded again on July 22, 1917 and as my father said, “I guess they felt he’d done his time,” so he after spending more than two years in the trenches of France he was transferred to the reserves back in England. He married my grandmother in 1918 and was formally discharged from the service in 1919. He lived to be 98 years old.

Everyone in the family used to be annoyed that he never wore his hearing aids. He said they never worked. Yes, he was stubborn. I’m sure that was a requirement for survival. However, as I read more and more about life in the trenches I now know the noise was deafening from gunfire, bomb blasts, and grenades. Of course he needed hearing aids later in life and what a tragedy that it was viewed as an inconvenience instead of a sacrifice.

I remember my grandfather as an old man with white hair and a sense of mischief mismatched to his years. He was perpetually covered in cigarette ash (two packs a day, starting with Woodbines at the age of eight), who liked two heaping teaspoons of sugar in his tea, ate bran everyday, and watched cricket with the volume turned way up. However, this Memorial Day I learned a little more and I am in awe of what he survived and wish with all my heart that I had known how to ask him more and to thank him.

I told my children about their great-grandfather and how it is our duty to preserve as much of this part of his legacy as possible. I don’t know how one qualifies one war as “just” and worth preserving and another as criminal action, however, if we are going to ask men and women to fight for us the least we can do is respect them, help them, acknowledge the horrors, and preserve their experiences. Lest we forget really does say it all.

“Now remember,” I said to Oliver and Victor, “Remember that when things are hard that you are a Gunter. The same thing that kept your great-grandfather going in France is the same thing that burns inside of you. It got you through months in the neonatal intensive care unit, surgeries, and infections. Your great-grandfather was shot twice and probably gassed and still made it to 98. You have that in you.” I point at their chests for emphasis. My boys were not expected to survive, and yet here they are a pair of mischievous nine-year-olds who love a party.

I’m not exactly sure how best to honor my grandfather’s legacy and his gift, but I figure this is a good place to start. 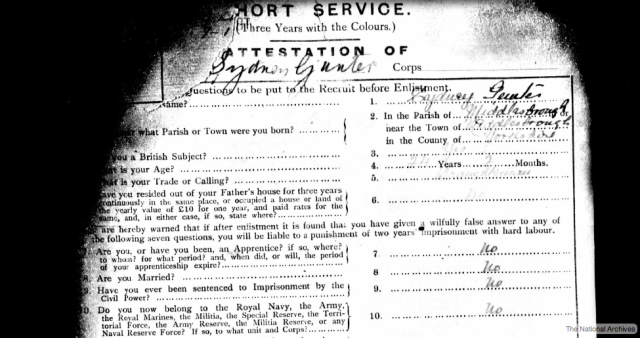