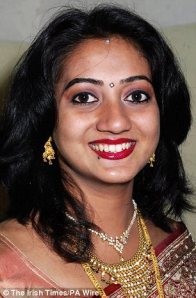 As the inquest into Savita Halappanavar’s death continues we have heard about delays and errors, all of which most likely contributed to her terrible outcome. However, along the way those who have tried to pass off her death as medical negligence and nothing to do with Irish law or Catholic ethos have rested on the assertion that she wasn’t sick enough to need a termination.

One of the experts at the inquest, Dr. Susan Knowles, a microbiologist at the National Maternity Hospital in Dublin is reported in the Irish Times as saying there wasn’t a substantial risk to Ms. Halappanavar’s life before Wednesday at 6:30 am. While she admits to what she calls “subtle indicators” of sepsis and chorioamnionitis (infection of the fetal membranes), she asserts these findings were just not enough to warrant a termination.

By the Monday morning, less than 24 hours after admission, Savita had a white blood cell count of 16.9 and ruptured membranes. She also had pain. This would be enough to prompt every OB/GYN I know in the United States and Canada to discuss evacuating the uterus, or at least gather more evidence to say it is safe not to hold off and watch and wait. The standard of care in North America is “expeditious delivery” and antibiotics when chorioamnionitis is diagnosed, not wait until this get worse.

By Tuesday evening Savita had shaking chills and an elevated heart rate. This means the infection had now spread from the uterus to her blood stream. This is what happens when chorioamnionitis is inadequately treated. At this point my colleagues and I would be panicking about Ms. Halappanavar’s health. Not so in Galway. Dr. Knowles didn’t think things were bad enough until the next day.

If the diagnosis of chorioamnionitis is in doubt there are ways to be more certain, although keep in mind, Savita’s risk of infection was 30-40% the second her membranes ruptured early Monday morning so the burden of proof for infection in such a setting is low. Her white blood cell count (WBC, a marker of infection) was apparently 16.9, which is very suspicious, but looking at specifics of the white blood cell count (the neutrophil count and the presence of bands, which are immature neutrophils) could have provided more about the possibility of a bacterial infection. An elevated neutrophil count or a bandemia would all but confirm chorioamnionitis in this clinical setting. An amniocentesis could also be performed if the diagnosis of chorioamnionitis were in doubt.

One could argue that the diagnosis of chorioamnionitis wasn’t in doubt as the team started antibiotics on the Monday evening, although say, just for the sake of argument, that the antibiotics were started as prevention. In this case, as infection was obviously suspected why wasn’t more done to confirm the diagnosis or rule it out? Was the maternity ward at Galway that much of a fuck up that no one, from nursing student all the way up to senior staff, could possibly conceive of the idea that a woman with ruptured membranes at 17 weeks might actually have an infection? Or didn’t it matter, because Savita was pregnant with a 17 weeks fetus that had cardiac activity but a 0% chance of survival. If Savita had to be sick enough to have a termination why bother confirm a diagnosis that no one could do anything about? Did the staff feel the only treatment that they could legally give was antibiotics so there was no point in knowing more?

Dr. Knowles’ testimony confirms for me that the law played a role, because her statements indicate the standard of care for treatment of chorioamnionitis is less aggressive in Ireland. This can only be because of the law as there is no medical evidence to support delaying delivery when chorioamnionitis is diagnosed. Standard of care is not to wait until a woman is sick enough to need a termination, the idea is to treat her, you know, before she gets sick enough. An elevated white count and ruptured membranes at 17 weeks is typically enough to make the diagnosis, so Dr. Knowles needs to testify as to what in Savita’s medical record made it safe to not recommend a delivery.

By the way, I also disagree with Dr. Knowles about her interpretation of Savita’s medical record, the chart doesn’t have “subtle indicators” of infection, it screams chorioamnionitis long before Wednesday morning.

In North America the standard of care with chorioamnionitis is to recommend delivery as soon as the diagnosis is made, not wait until women enter the antechamber of death in the hopes that we can somehow snatch them back from the brink.

If Irish law, or the interpretation thereof, had nothing to do with Savita’s death no expert would be mentioning sick enough at all.