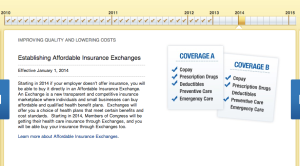 The Affordable Care Act (ACA) legislation regarding abortion does not take effect until 2014. Under the ACA, insurers who participate in health insurance exchanges will be free to offer plans with abortion services or not. Individual plans can also choose their degree of abortion coverage (life of mother/rape/incest, have broader coverage for genetic anomalies, or include elective abortion), however, no federal money can be used to pay for abortions beyond Hyde (rape/incest/life of mother). To get extra abortion coverage women will be required to pay for a separate abortion rider.

Under the ACA, each states exchange must provide one health plan that covers abortion and one plan that does not cover abortion or restricts abortion coverage to the Hyde basics. Except where they aren’t allowed to provide abortion coverage. You see, there’s a loophole. A big loophole. Under the ACA the states are allowed to pass laws that completely prohibit abortion in the insurance exchanges. This is not just some hypothetical they might pass a law, it’s happening right now.

In preparation for the great abortion onslaught that the ACA is sure to bring (remember, abortion coverage does not increase the rate of abortion) 20 states have already spent money passing laws affecting abortion coverage for their health insurance exchanges. As a result:

The ACA does many great things for health care, for example doing away with lifetime limites and pre-existing condition clauses. I also appreciate that legislation as sweeping as the ACA will need amending over time. However, allowing states another avenue to deny women the full spectrum of reproductive health services (especially considering the ACA requires plans to offer “essential health benefits”) is wrong.

From a business standpoint, excluding abortion services does not lower the cost of insurance and we know from the Canadian model that free abortion does not increase the rate. Therefore, the ACA legislation on abortion is simply another assault on Roe via the side door offered by the States. The abortion riders are likely to be $80 or more and will require a waiting period. In Kansas they don’t expect to sell any. However selling off reproductive rights state by state, well, that’s another matter.