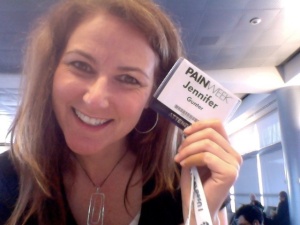 Yesterday concluded Pain Week, the largest pain conference in the United States (or so they said at the opening ceremonies). There were a lot of really interesting lectures, some very pertinent to my pelvic pain practice and others less so, but still interesting. For example, I don’t treat head and neck pain, but many pain patients have more than one pain syndrome so it is always helpful to know more about other pain syndromes, especially as pain in one area of the body can fuel pain elsewhere.

Much to my dismay, however, I attended what I can only describe as THE WORST LECTURE I HAVE HEARD IN MY CAREER and also the second worst lecture. I have heard other crappy lectures, but they were drug dinners not billed as state-of-the-art evidence-based medicine with CME credit. And kids, I expect a hell of a lot more from the latter.

The two speakers were ok, it was what they said that wasn’t. For starters, both lectures were opinion-based, not evidence-based. Promoted as state-of-the-art therapy, but what I can only responsibly describe as fringe, because I‘m the chick that starts checking weird sounding shit on Pub Med during the lecture (thank you Cosmopolitan hotel for your super-duper fast and free WiFi that requires no tedious sign-in or stupid video to watch). That is, of course, if I don’t have a clear recollection of the literature. I have a great memory, so typically I can remember most note-worthy articles as well as many that are less ground-breaking.

Let me tell you, basing your treatment protocol on a few animal studies is SO NOT COOL. If you want to do that crap in your own practice, well, let the malpractice chips fall where they may, but you CAN”T TELL PRIMARY CARE PROVIDERS IT IS STANDARD OF CARE! Typically, I like to see some phase 1 and 2 studies before making the leap from bench research to humans.

Some recommendations from one of the speakers bordered on dangerous (well, maybe not bordered because, I don’t know, breast cancer is NOT A DESIRABLE OUTCOME!). When I questioned the speaker during the Q/A time, my quoting the New England Journal of Medicine and the Woman’s Health Initiative were waved off.

The other speaker quoted therapies that he believed were standard of care, however, when I did my Pub Med duty I found that Cochrane reviews on his recommendations were equivocal at best. There were some promising small retrospective studies, but when that is the case, you don’t say, “This is what all you primary care providers should do,” you say, “This is a difficult area of medicine with not a lot of good research. I am using some small studies to guide what I do.” And then of course you quote the fucking studies! (not included in the slides/handouts, BTW). One speaker also advertised his book on the subject at the end of the lecture (so not cool and definitely conflict of interest as it was about pain medicine) and his own personal CME course offered through his private practice so I too could learn more clinical pearls from his own personal ivory tower.

What bothered me the most was that many attendees seemed to be lapping it up. However, a few of us who were shocked beyond belief gathered afterwards to share our utter dismay.

So I decided to make some noise. Too often we let crap slide. We give an average evaluation and then move on.

But that is not my style, because my lasso of truth travels with me everywhere.

Not only did I dutifully fill out my speaker evaluation forms, but I marched up to the organizers, demanded to speak to the person in charge, and then explained point-by-point why not only the one lecture was not CME, but that it was potentially dangerous. I asked for an additional evaluation form and then shared my thought that whoever believed those slides to be CME acceptable should be spoken with as well. Sadly, the second lecture happened the next day. Trust me, I was way beyond bold on that evaluation form as well.

Here’s a dirty little CME secret: not all reviewers know enough about the subject to actually screen the slides. Some who don’t review the literature to double-check, others let it slide. So, if there are no references on the slides, question what you are hearing.

I EXPECT evidenced-based medicine at a CME event, not opinion. And so should you. If there are no references it’s opinion until proven otherwise.

If opinion is being pased off as evidence at your next meeting, speak up. Considering how loudly I voiced my opinion, I am hoping the organizers of Pain Week will be more attentive and not let garbage slip through again.

Remember, we are ALL curators of medicine. All the time.